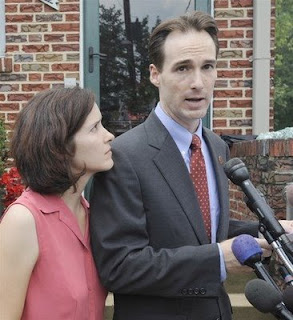 If you want to keep a bad drug raid from hitting the papers, I guess you shouldn't do it to prominent white folk (see picture).

[The Mayor of Berwyn Hights, Prince George County, Maryland] Calvo's home was raided by the county Sheriff's Office SWAT team and narcotics officers after a package of marijuana addressed to the house was seized. Police obtained a search warrant and officers broke down their door and shot and killed the family's two black Labrador retrievers, Payton and Chase.

But arrests this week of two men involved in a marijuana smuggling ring that allegedly delivers packages of the drug to unsuspecting homes appears to indicate that Calvo was not involved in any illegal activity.

I've always told people that can't be illegal to receive drugs in the mail, because if it were, why not just send drugs to all your enemies. I made the mistake of applying logic to the war on drugs.

Now seems clear that this mayor is not a drug dealer. And you know what, despite what I wrote earlier, it does matter and I do care. It's wrong for police to bust down your front door when nobody's life is in danger. It's bad enough to do so if you do have drugs. But to do so when you don't have drugs is far worse.

Email ThisBlogThis!Share to TwitterShare to FacebookShare to Pinterest
Labels: calvo, war on drugs

This raid is being discussed at Radley Balko's blog, The Agitator. I highly recommend this blog to your favorites, as it focuses much attention on the drug war, police militarization, etc.. One commenter on the blog said the story had hit CNN. Guess it'll be hard for P.G. County to sweep this under the rug. As Balko would say, "just another 'isolated incident'."

I do like The Agitator. I'm not too fond of the anti-police tone (or the libertarian bent). Still, there's some always good stuff in there.

Yeah, unfortunately some of the commenters lack the ability to have a nuanced discussion about law enforcement. Since I'm employed in public safety, I try to talk sense into some of the most obnoxious folks, but they generally have their minds made up already (they'd make great fascists, and I try to point that out). As for the libertarian bent, well I consider myself to be a libertarian in a broad sense. More specifically, I would place myself on the left side of the movement in the vicinity of the Georgists.

Politics makes strange bedfellows. Libertarians love my position on drug legalization. But I dont' get it... I want to regulate. I want to get the government on your back, not off!

I also like the government paying for public transportation, health care, the arts, and those to weak (or idiotic) to help themselves.

I love the libertarian idea of limited Federal Government. I would hate to live in libertarian state (Somalia comes to mind).

I'm a strange combination of liberal at the local level, and libertarian at the federal level. Currently we've got the worst of all: a big in-your-face conservative federal government.

I live civilization. I even don't mind paying taxes.