Oh, Taser. How you kill. 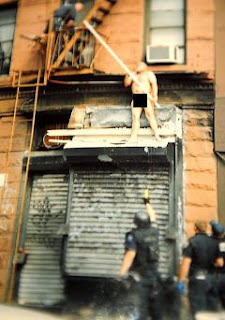 In an instructional manual for Taser use. This picture seems like an example of what not to do. Don't Taser naked men standing on ledges.

But it's not that simple. Here's story in The Daily News . The police were tying themselves to the fire escape to try and grab the guy. The guy takes a large fluorescent bulb and starts hitting and pokingthe officers. I think you gotta Tas him and take the chances he dies. I think you could shoot him in this case. But at least using the Taser gives him some chance to live.

But I will note, because I'm generally against the use of Tasers, that this is at least the second man in New York to die after being Tased is the past few years. Tasers can be lethal and should be thought of as potentially lethal force.

Email ThisBlogThis!Share to TwitterShare to FacebookShare to Pinterest
Labels: tasers

Did they tase his nads??

Why not just wait him out? Seriously, how long can a naked guy stand on a tiny little ledge?

Have you seen David Blaine? Weeks! But seriously, I think that was kind of the plan. Your reaction was also my reaction at first glance of the picture. But the cops also want to try and make sure the guy gets down with hurting himself.

A tragedy on both sides. But why didn't the cops get a mattress to cushion this crazy dude's fall? I mean he didnt have a gun on him, how long could it have taken to rassle up a mattress?

Okay I just now read your commenet..didnt know he was hitting the cop with the bulb..that makes it more of a close call.

Thanks! I missed me on the radio today. Twice. Damnit.

The mattress was on the way. How long could it take to rassle up a mattress? In the police world, I guess far too long.

And since I wrote the post, mostly from conversations with police office students of mine, I'm become more convinced that it was not a good call to Tase.

Mostly from students but also a later video that appeared on the NY Post article showed that the bulb attack wasn't too vicious.

So the police officer made a bad call. Who hasn't? But when police make a mistake, people can die. It's just a real shame that two people ended up being killed.