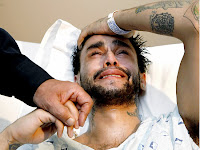 Michael Mineo is lying. I've said it before and I'll say it again. That's what I think.

So why is a grand jury being started on the case? Does that mean there is truth behind Mineo's claim? No.

Here's what I think is the story. Michael Mineo won't release his medical records because they don't support his lies.

The grand jury is a way to subpoena his medical records to show that the cops, good honest cops, did nothing wrong.

Absolutely. Medical records would help to determine if Mineo's injuries are consistent w/ the weapon he claims was used. If he claims he was "violated" by those who are sworn to serve and protect, why wouldn't he want the medical proof to appear in the public record?

Also, what are the forensic biology people saying? I know the "suspects'" radios were confiscated. Blood and fecal matter on a radio would be hard to explain, but I don't believe investigators have found that. What about the squad used to transport Mineo? As far as I know, all the prosecution has now are "conflicting witness statements" and Mineo's allegations.

Incidentally, I've tried to explain some of this to the nice folks at the Agitator, and I know you've done the same. If this turns out to be BS, I expect apologies from them and all the other instigators (Ha!). I also hope that the officers implicated in this "crime" sue the fuck out of Mineo, Sharpton and others. I don't think people understand that cops CAN do that.

It's also noteworthy that the police department didn't even place these officers of "modified" assignment. That would be standard for any investigation with any credence.

By the way, a shout out from Agitator gave me about 800 new hits on this blog that day (normal is about 150). Didn't seem like any one of them bought a book, alas.

Hmmm, didn't know the officers were still on the street. That's kind of a one finger salute to the "victim." Wow.

It's great you got some attention from the Agitator crowd. I've contributed to the site (under the moniker Helmut O' Hooligan), and I've argued--with some success here and there--that some of the commenters need to take a more nuanced approach to law enforcement issues. Put bluntly, a number of them don't know the first thing about the field, so they just make glib, idiotic comments. Balko's work is pretty impressive though, so I still visit the site now and then. I hope visiting your site will be educational for those "Agitators" that haven't made up their mind already. I hope a few even buy your book.

Now if we could just get Obama to show his pertinent records...