It seems, as expected, that things are calming down in Athens.

Apparently, nobody has been killed in the rioting. Apparently, the bullet that killed the kid was indeed a ricochet (that's why US city cops are not allowed to fired "warning shots").

[Dec 12: today the Kathimerini reports the opposite conclusion:

Meanwhile the results of forensic tests indicate that the bullet that killed 15-year-old Alexis Grigoropoulos, and sparked this week’s rioting, appears to have entered the youth’s body directly. This casts doubt on claims by the 37-year-old policeman charged with the boy’s murder that the bullet had been fired as a warning and ricocheted.

According to sources, the results of a ballistics test revealed an as yet unidentified substance on the bullet, as well as marks, but experts ruled out the possibility of the bullet having hit a metal or concrete surface before striking the youth, fueling speculation that the marks on the bullet had been caused by contact with the victim’s bone.]

Here are some of the better You Tube clips I've found. I automatically discounted any video set with a background of death-metal music. Come on, manges, you're not helping your cause. I'm only willing to sacrifice so much for my cause (but bad music takes out probably 80% of the videos posted).


And this is a news broadcast with some context. 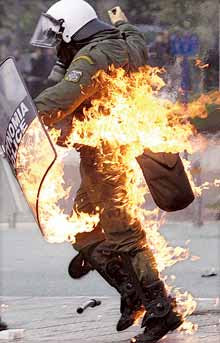 [December 13: In response to Nick's comment that the media has such a pro-police bias, I'd like to provide a caption to the picture to the right. Luckily, according to the Kathimerini (and to think, I was duped by their biased and horribly pro-police propaganda simply because they publish in English), the police officer in the picture was not seriously injured.

But perhaps the caption could be:

While wrapped in the enveloping warmth provided by unarmed freedom-loving youths and pondering the ever-present Greek quandary of freedom of death, a Greek police officer dances a celebratory Kalamatiano in an attempt to shake off the fascist symbol of his uniform and with it, the last vestiges of the Yoke of Ottoman Oppression.

Email ThisBlogThis!Share to TwitterShare to FacebookShare to Pinterest
Labels: riots

"I automatically discounted any video set with a background of death-metal music."

Wise move, Peter. Including any selections from Rage Against the Machine also would have been cliche.

Peter, your tendency to take the word of the cops for granted is directly contradicted by the article below the following comment you made:

'Apparently, the bullet that killed the kid was indeed a ricochet'

The article goes on to detail forensic evidence showing that the police shot the kid, and did not fire any warning shots.

Perhaps next time you defend the indefensible, you should selectively quote a bit more carefully. Surely they taught you how to manufacture and tamper with evidence at the Police Academy - isn't that what cops do best?(not to mention most media outlets- how many reports on the Greek situation have claimed 'protesters attacked police', while simultaneously showing footage of the direct opposite ie police lines charging unarmed protesters and firing teargas at demonstrators?)

I'm not exactly certain what or who you think I'm defending. There's no question the police shot and killed the kid. The question is whether or not the police were aiming at the kids or firing a "warning shot."

The mere concept of a "warning shot" in a place like Exarchia is absurd. You shouldn't be firing off rounds in the center of Athens, period. (unless, of course, you have good reason to shoot to kill.)

But I do think a police officer should be able to walk safely in any neighborhood in Athens, including Exarchia. And no, I don't think life would be better off without police. So the question we all have to answer is what we want police to do and how we want them to do it.

I can also tell you what I won't defend: self-styled anarchists rioting, breaking windows, burning down stores, and generally destroying a city I love.

Regarding the police academy (and they say that sarcasm doesn't come through in writing, so let me flag it here for you)... let me look at my notes.

Oh, here they are:
Month 1: Learning the secret police handshake
Month 2: Lying in court
Month 3: Evidence manufacturing and tampering
Month 4: Taking bribes
Month 5: Killing minorities
Month 6: Rudeness, general low-level brutality, shaking down drug dealers, how to deal with the constant accolades of the media without all their pro-police coverage getting to your head.

Phew, that last month was busy, so much to cover. Month three was more laid back. But yes, it appears I did receive the standard four-week course in how to manufacture and tamper evidence.

But you know, until you hit the street, it's hard to really apply all the "book" knowledge and tie everything together. I mean sure, we learned all the pieces. But to carry a made-up case through from beginning to end, beginning with planting drugs, through a tortured confession, and ending with the wrongful imprisonment of an innocent person... wow, you just can't learn that in a book.