It's official: Obama is a great black

The Great Blacks in Wax Museum unveiled their Obama statue. Pictures in the Baltimore Sun. 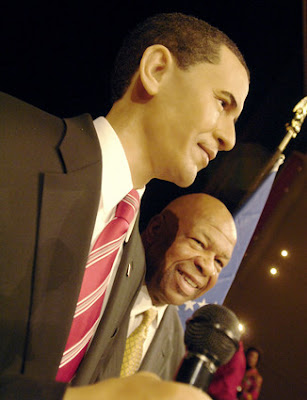 Now you might think I'm writing The Great Black in Wax Museum because of some thinly veiled hipster irony in this supposed post-racial era.

Actually, no. I just like the museum. And yes, unlike anybody else I worked with, I've actually been there as a paying customer. Wax museums crack me up. I always roll my eyes thinking about them. Doesn't everyone?

But then when I go to one, I find them very amusing and somewhat educational (for the record, I also like those old-fashioned behind-the-glass perspective-based panoramas museums used to be into).

Anyway, the Great Black in Wax Museum not only has a great name, but it's also one of the only cultural institutions that actually is in the Eastern District. 1601 E North Ave. It's just across the street from the far better patronized 1400 E North Ave.

Is the neighborhood safe? Well. No. But that shouldn't stop you. Just be careful. I'm not saying you'll be shot. I'm just saying lots of other people have been shot very nearby. If you can't park right in front on North Ave, I'd try the courthouse lot across the street.

Is that belittling to be called a Great Black? What about a great person?


BTW, I went there and looked for the Great Whites section.... They had some sharks, but that's about it.

Uh.....nobody else finds this troubling??

Oh, DJK... I don't think you really went there.

But seriously, no, I don't find it troubling.

Having a museum about being a general racial majority? That's kind of creepy.

What about a white or "European American" caucus? Would that be ok? not "creepy"?