Sheriff Leon Lott is an Idiot

Lott is the guy who wants to lockup Michael Phelps, the Olympic swimmer, for smoking mari-ju-wana in his county.

That at least made me suspect that Lott is an idiot. But this picture, of Lott in front of his new "peacekeeper", confirmed it. 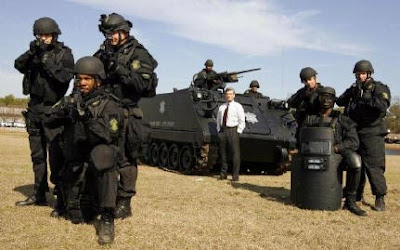 Talk about putting the war back in "war on drugs." What a dope. Thinking that a tank is an appropriate civilian police vehicle.

[Update from the AP: "A South Carolina sheriff said Monday he won't charge swimmer Michael Phelps after a photo of the 14-time gold medalist showed him smoking from a marijuana pipe."

But what's a sheriff to do when there is clear evidence of minor law breaking? Doing nothing is always an option.]

Email ThisBlogThis!Share to TwitterShare to FacebookShare to Pinterest
Labels: militarization of police, war on drugs

An armored vehicle I can understand. The .50 cal on top is a bit hard to justify.

I think the sheriff would have been much happier in the military. He could have posed in front of hundreds of tanks as a general.

I doubt he would have made a good general. Don't forget, the guy is an elected schmuck.