Was that all a dream? Or Baltimore?

My wife, a friend, and I were on the 10:05 train to Baltimore this morning. Twelve hours and one Bull & Oyster Roast later, we're back in New York City. It's a shame we couldn't stay longer, but a good time was had by all.

On the menu:
About 2 1/2 dozen delicious Maryland Oysters.
3 deep fried oysters (about 3 oysters each).
1 cup of delicious oyster soup (1 oyster).
3 big hunks of pit beef burnt ends.
A few regular slices of pit beef.
One small Italian sausage.
One piece of cake.
One diet coke (to keep the girlish figure)
And God only knows how many buckets of beer.

I don't like oysters as much as crabs. But these were very good oysters. Unlike the crab feast, this was almost a stag affair. 80% male. And lots of tables brings cards and gamble at their table. Drinking, gambling... all we needed was whoring to make this church party complete.

I also learned from my friend cooking the beef (strange coincidence he's a guy I actually know from meeting him in a bar in Somerville, Mass, many years ago...) that pit beef is not, as I've described it, smoked roast beef. Well it sort of is. But it's marinated overnight first. Then baked to 100 degrees. Then grilled and smoked to 130. It's delicious.

If this were in New York City all this would probably cost, including tax and tip, close to $200. Of course it's not in New York. And that's why we go to Baltimore, hon.

Incidentals: On the money wheel I broke even (played $4 won $4). I didn't play the liquor raffle (I won 3 bottles last time and didn't want to press my luck) but my buddy did win.

Nor did I win any other raffle for a grand loss of about $10. And I bought a souvenir hat, also $10.

Using Amtrak miles, the train trip was free (otherwise that would be the $200 bank-breaker). 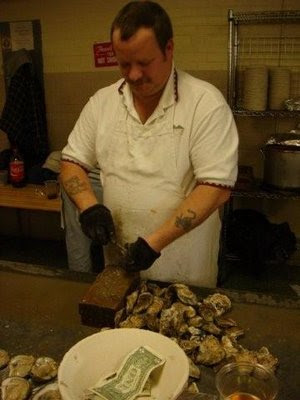 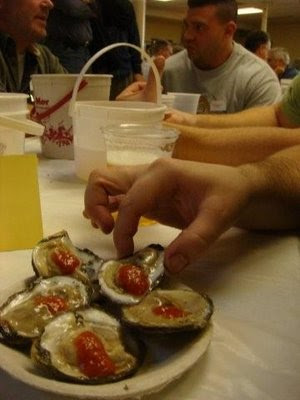 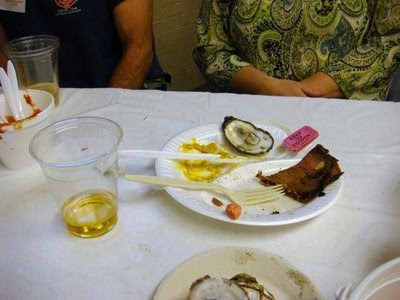 No carry outs seems like a fair rule. Though some people always try. 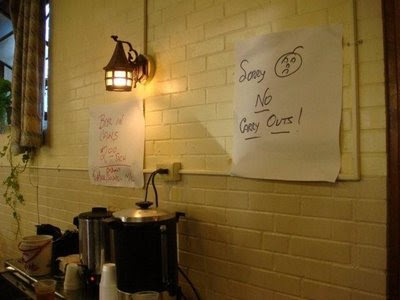 Back behind my sergeant's Baltimore police home bar: 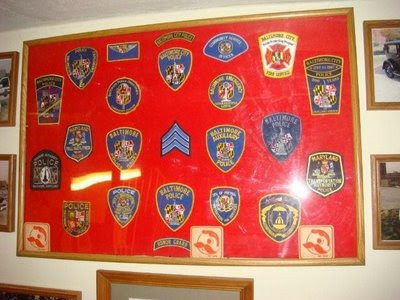 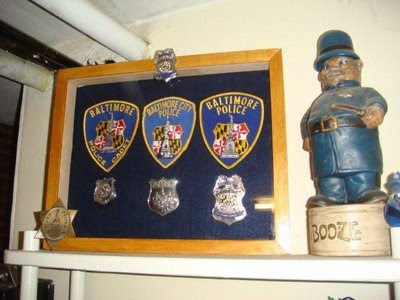