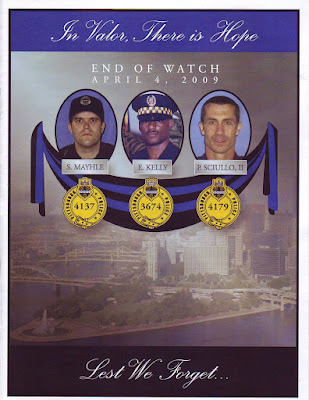 I just happen to be in Pittsburgh. And I just happened to bike by mile after mile of police cars from around the Commonwealth of Pennsylvania and the nation. I asked an officer where the service was and decided to pay my respects to officers Paul J. Sciullo II [pronounced Shullo], Eric Kelly, and Stephen Mayhle.

The service was in the U Pittsburgh basketball arena. It's been seven years since I've been at a police funeral. I don't miss them at all. I sat and stood with other police officers.

I felt I got there late, since I hadn't really planned on being there at all. But it was still hours before everybody finished filing in. Everybody is standing. Last came the Pittsburgh police. And then came the fife and drum brigades.

I've been to a half dozen or so police funerals. When I walked into the arena I didn't even know the officers' names. This won't be a big deal, I thought. But I'll be damned if I can stay dry-eyed as bagpipes play and I salute the coffins as they pass below.

There were four different bagpipe troupes, one for each officer plus the NYPD (damn the NYPD has a lot of officers who can play the pipes). The first was Pittsburgh. The second was Cleveland. I missed where the third was from.

I left at around 3:15pm as the mayor was saying things that mayors do. I had paid my respects... and there was still time to see the Warhol Museum before it closed at 5pm.

I didn't bring my camera on this trip. But I asked a stranger on the street to email me some pictures she was taking of police cars on Forbes Street. Hopefully she will. 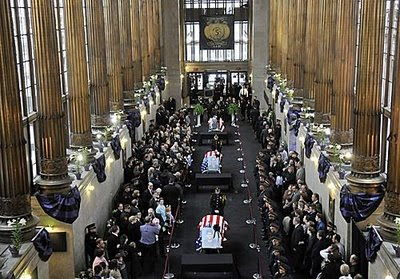 Coverage in the Post-Gazette (photo above by Steve Mellon).

Thanks for the reflections, Peter. I've been to 3 police funerals here in Central IL. Somber, sad...words fail. But the way everyone comes together can also be inspiring. And damn those bagpipes. I'm from a police family and I also grew up around Irish music (Irish on mom's side) so I'm well-acquainted w/ the pipes.

And maybe there's something about standing at attention for hours at first that kind of breaks you down just enough so that when bagpipes finally come... there are a lot of tears. And then to have the three coffins come in one by one... it's heavy.

People I talked to around town kept telling me they had never seen anything like it. And of course they hadn't.

I kept thinking about how rough one death could be in my department of 3,000 officers. Here are three deaths in a department of 800.

I do hope it helps the families of the officers to see such support. Because even the best funeral doesn't bring anybody back from the dead.

I'm getting teary eyed and a lump in my throat just writing about it now...