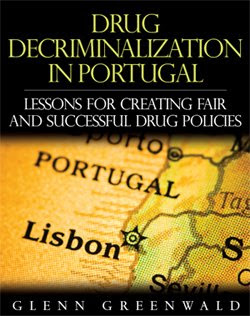 If you have an hour-plus to spare, listen to Glenn Greenwald talk about Portugal's experience with drug decriminalization since 2001. Here's a link to the video and also a downloadable audio podcast.

Under Portugal's new regime, people found guilty of possessing small amounts of drugs are sent to a panel consisting of a psychologist, social worker and legal adviser for appropriate treatment (which may be refused without criminal punishment), instead of jail.

That's from an article in Time. And here's Greenwald writing in Salon.

First the facts: drug use has declined. Repeat: decriminalization does not increase drug use.

Greenwald addresses this and other points. For instance, the myth of American exceptionalism. This is tendency of some to discount any foreign case study simply because it's not here. "The U.S. isn't like the Netherlands." "The U.S. isn't like Portugal." OK... But this argument looks pretty feeble as more and more countries try decriminalization successfully. The onus should now be on the naysayers to explain just exactly what differences in these countries make their experiences so inapplicable to us here in the U.S.

Greenwald also addresses the logical difficulty many have in comprehending how decriminalization could possibly mean less drug use. Even though the facts consistently indicate that liberal drug policies reduce drug use, people just don't believe it. So Greenwalk talks about why. Only with decriminalization can the government and even health-care workers effectively reach drug users. Only with ending the war on drugs does the government have the money to offer treatment and educate the public.

So why decriminalization rather than legalization? Because of international treaties and pressure from the U.S. and other countries to keep up the war on drugs. In fact, in the Portuguese model, legalization was taken off the table from the very beginning. Given the political situation, it simply was not an option. The shame with not going all out and regulating the drug trade is that you are unlikely to get any decrease in prohibition-related violence.

Peter Reuter provides a counterpoint of sorts about half-way through, arguing that decriminalization wasn't so much a failure, but rather that it didn't actually matter that much. But he concludes that the study is, "One more piece of evidence which helps strengthen the argument that decriminalization would have minimal adverse consequences and very substantial desirable consequences."

Greenwald says his main take-home point that can transform the drug-policy debate is that decriminalization won't lead to an explosion of drug usage. "This shatters... the central myth that drives virtually even drug policy debate in this country."

Email ThisBlogThis!Share to TwitterShare to FacebookShare to Pinterest
Labels: Portugal, war on drugs

"Greenwald says his main take-home point that can transform the drug-policy debate is that decriminalization won't lead to an explosion of drug usage."

Reminds me of the Zogby poll on the LEAP website that says that 99% of respondents would not use Heroin or Cocaine even if they were legal. Most people won't touch the "hard stuff," because they are aware of the risks, not because government says "just say no." Incidentally, I just ordered this study from CATO and I'm trying to get through it now. Thanks for doing your part to promote Greenwald's work on this topic!

How about the dutch? Are their experiences similar? Why are they looking to restrict some drug use in public places?

The Dutch experience is pretty similar, but surprisingly more restrictive than Portugal. Hard drugs are still criminalized in Holland (though admittedly prosecution is minimal, at least by American standards).

The Dutch want to restrict pot smoking in some public places because 1) there's a difference between possession and public use, 2) it was never actually allowed and they see this as a quality of life issue, and 3) "problem" youths smoke weed in public so restricting public consumption is seen as a way of cracking down on these youths [of immigrant decent].

But while details and problems of the Dutch approach to policing drugs are fascinating to me (and perhaps you, too), it shouldn't distract from the greater truth about the effectiveness of Dutch drug policy overall.

Click here to see everything I've posted about the Dutch.

What's funny was the stuff our "Drug Czar" (can't remember his name. - Grandstander McIngorantAss, I think.) said about the Dutch days before his trip there...


The Dutch and the Portuguese have a good working model....let's give it a shot!