It seems that if you go to Burning Man and get burned by the actual burning man by walking in fire, you can't sue.

Lowering the Bar brought this important legal decision to my attention.

I went to burning man once. There's some incredibly cool art and ideas there (and no, it's not just topless women riding bikes--though you'll see that, too).

It's kind of amazing that more people don't get hurt, given the Mad Max artistic chaos and fire and drug fueled ambiance. 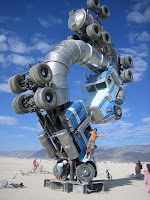 Given all the things Burning Man could have trouble with--drugs come to mind... and the fact there are tens of thousands of people congregate on what might be the least hospitable place on earth--it's nice that at least they're safe from this frivolous lawsuit.

But I still cringe just at the thought of all that gypsum dust.

[update: My wife said she thought the headline was an onion story. She adds, "I think when it says on the ticket that they're not responsible if you _die_, you pretty much have no case.]

Email ThisBlogThis!Share to TwitterShare to FacebookShare to Pinterest
Labels: courts