If you look at this chart, it's not hard to think that the great crime drop was caused by locking up all the criminals. A student brought this up in class. In the 1990s, it looks pretty convincing: 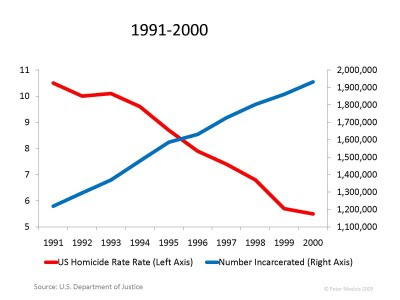 But just looking at the 1990s misses the big picture. Here's the same data going back to 1925. Crime went up and down and up and down, but the prison rate stayed more or less the same, and then skyrocketed after 1970. 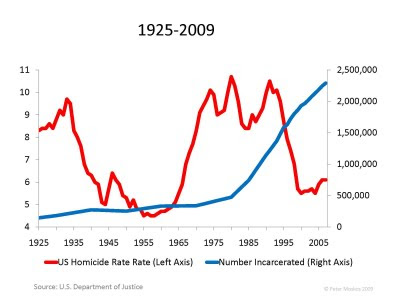 And here's what happens it you look at each decade separately: 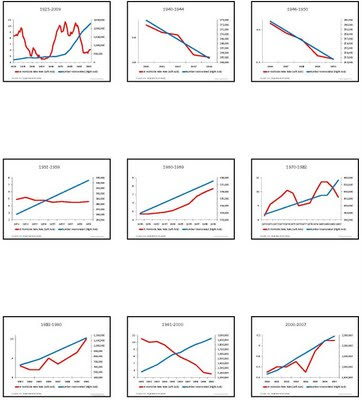 What it comes down to is this: 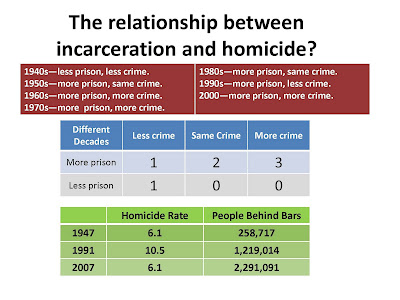 So what makes the 1990s the decade of choice that proves incarceration is the solution to crime? Was there some magic tipping point? Was there something special about the second million we incarcerated that didn't apply to the first million? Probably not.

That accounts for a relatively small portion of the increase in the actual number of prisoners.

The glorious and on going "drug war" is obviously the main cause behind the increase in prisoners. Add in a pinch of mandatory sentencing and voila...............prison population that reaches Soviet or Apartheid South African proportions.

As for the good of locking up a few extra million people it does provide prison jobs for rural counties throughout America.

Factory closing? Hell, lobby for that new prison the state needs to lock up all those low level drug dealers. Make sure the prison is hundreds of miles away from the homes of the prisoners. Cut them off from their families even more. Pure genius.

Sure, there's a better way.

Legalize drugs and treat it as a public health problem. That "solution" will cause other problems, but they are likely to be less damaging to society than the problems caused by drug criminalization.

Unfortunately, we live in a political society where politicians rail about morality and drug use while getting drunk and banging other men's wives.

We get to sit back and listen to John McCain lecture about how marijuana has no legitimate medical uses. Senator McCain being well known for his medical knowledge and voracious intellect.

We live in an "immature" society.

At some point it would be nice to have a national leader who just stood up and told the truth. That day may come, but I'm not holding my breath.

Smart man. Of course I should be looking at rate. But... if you do everything looks the same. And it was just a whole lot easier to make the tables with absolute numbers.

And these pictures aren't to convince people who understand stats. The same thing could be proved more convincingly with advanced stats. It's to persuade people who look at the 1990s and say, "see! proof prisons work!"

Check out Bernard Harcourt's series of blog posts at volokh.com; this one links to all the others:
http://www.volokh.com/posts/1177998929.shtml

Harcourt brings a third factor into the analysis - shifts in the rates at which offenders are shunted to mental hospitals vs prisons.

Interesting. But am I missing something? Seems to me he's simply combining total incarcerate rate and using that as a variable and correlating that with homoicide. That's interesting, but somewhat simplistic.