There's a great new academic book out by A. Rafik Mohamed and Erik D. Fritsvold: Dorm Room Dealers: Drugs and the privileges of race and class. 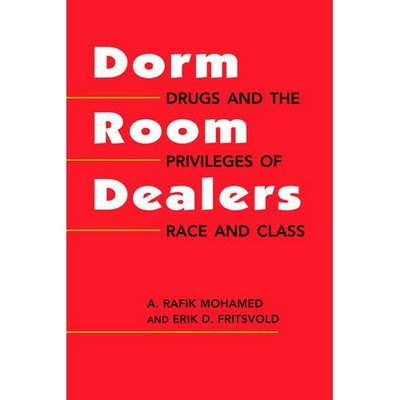 Too many books (my own included) treat drug crimes like it's some black thing that whites wouldn't understand unless some kind-hearted interpreters explain to "us" those strange things "they" do.

And yet, you may be thinking... if most drug crimes are committed by white people, and whites are just as if not more likely than blacks to take and sell drugs, then why do I think of drug criminals as black and why are most people in prison for drug crimes black?

We don't fight the war on drugs against rich college-educated white folks.

Most prohibition violence in the drug trade happens in non-white neighborhoods. So there's a reason we focus on crime more on drug crimes in some neighborhoods than others. To me it's the public drug trade that is so brutal.

These dorm-room dealers sell drugs like they're dorm-room posters. Everybody can see them. They have no fear. You see, the rules are different for them. College drug dealers get in the game, make some cash (or support their habit), and then graduate and get a job, maybe in daddy's firm.

Am I oversimplifying? Of course. You should buy the book. If for no other reason than it makes a great ethnographic counterpart to Cop in the Hood. Here's how the other half deals drugs. There's a good lesson there for all us all.

When I was in college (Rice University, early 80s), there was a dorm room dealer (let's call him "M"). M apparently made a mistake and started dealing off-campus.

When he did that, he was impinging on someone's territory. He was allowed to be a dorm room dealer, nothing more. So some thugs from off campus disciplined him by coming on campus and beating him up.

Needless to say, the administration at Rice, which had up to now been willfully blind about his activities, were pushed into action. M wasn't expelled, but he was no longer allowed to live on campus.

Peter,
You hit the nail on the head. The enforcement follows the violence, so why is it a racial thing?
Ed

True, but the reason for the police enforcement is not racist, and it works to reduce violence (possibly against "nonviolent offenders"). In comparison, do you think it is possible to enforce quality of life laws only against those who will commit more serious crimes. You know the theory is to reduce the feeling of lawlessness, and thus reduce the commision of other crimes. Drug dealing in public view creates an incredibly strong feeling of lawlessness.
Ed

This article may make you feel better about enforcement/sentencing disparity. I don't really agree with some of their reasoning, but I assume the overall trend is accurate, considering the source of the study. http://www.csmonitor.com/2009/0414/p02s01-usgn.html
Ed

I think this book misses the mark. The college dealers are being left alone because they are selling marijuana in a state (California) that has effectively legalized marijuana. If these students were selling heroin or speeds, they would be arrested and jailed. California police realize that a college pot dealer is not a major threat, and so it's low priority.

In my home state of New Jersey, where marijuana is not decriminalized, arrests of college marijuana dealers are common. At my college, the county prosecutor's office got a warrant to search a dorm room, and arrested the grandson of a college trustee for selling marijuana. The dealer was white, his family was very wealthy, but he went to jail for 3 months. While the topic of this book is fascinating, its venue (one private college in California) is too limited to draw any conclusions from.