When I saw the headline, "City to Pay $9.9 Million Over Man’s Imprisonment," my first thought was, "I hope that's not my city." But it is. That means a few bucks straight out of my pocket. I hate that! Especially for bad policing. 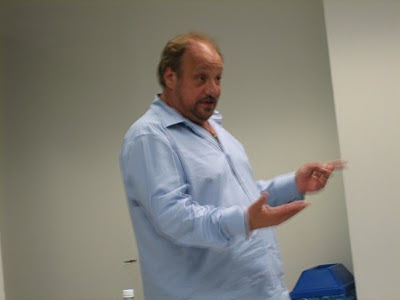 Gibbs was framed by the f*cking mop cops, Louis Eppolito and Stephen Caracappa. Gibbs was sentenced for a murder he didn't commit. A murder he had nothing to do with. He was sentenced to 20 to life. Eventually the cops were arrested and it was clear that Barry was framed. By that time he had served 18 years.

When the bastard cops were finally put on trial, Barry could be a bit of a showman: "Gibbs stood from his seat in the public spectator’s bench and shouted obscenities at Eppolito. As Gibbs was being ejected by Court Officers, Gibbs received the enthusiastic cheers of many of those in attendance." He was pissed off. Wouldn't you be? These cops had appeared in movies and made money off of books. All the while Barry sat in maximum security for nothing.

I'm happy for Barry. I called Barry just a few minutes ago and congratulated him (and told him to be very wary of people calling him right now!).

Now Barry isn't getting all that money. Lawyers get a third. Taxes will take another third. But that still leaves a pretty penny.

And I learned that Barry's health has not been great. Prison f*cked him up. And even if it didn't, I wouldn't exchange 18 years of my life for any amount of money. He's been shafted by cops and shafted by the criminal justice system. And nothing can make that better.

But at least on this day, we've got something to celebrate. Here's to you, Barry! Mazeltov!

[update: you can hear Gibbs tell his story.]