"A bunch of angry, fed-up federal police in Juárez launched a mini-rebellion against some of their commanders Saturday, accusing them of corruption.... The bottom line is that nothing seems to be able to stop or even lessen the violence in Juárez." So says the El Paso Times, just across the border, in the peaceful twin city of El Paso.

Probably, at some point in their career, every police officer has wanted to do this. It's like a pissed-off flight attendant jumping out on the slide of an airplane. But the editorial board of the El Paso Times figures:

Perhaps the last straw was the perception of police officers that their commanders' corruption and links to drugs and the cartels were putting the officers' lives in danger. That could be quite a motivation. 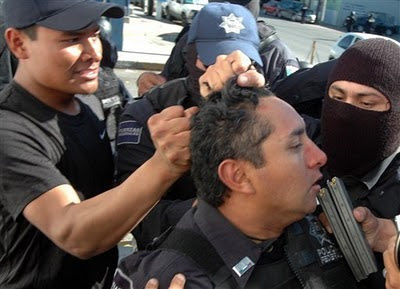 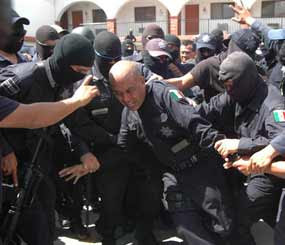 The caption of these AP photos by Raymundo Ruiz says:

Federal police agents beat a fellow officer after a top fellow officer was detained at his hotel room by his subordinates in Ciudad Juarez, northern Mexico, Saturday, Aug. 7, 2010. Around 200 federal police officers protested Saturday demanding the dismissal of fellow police inspector Salomón Alarcón Olvera, aka "El Chaman", accusing him of being linked to drug cartels and having participated in kidnappings, executions and extortions.

Email ThisBlogThis!Share to TwitterShare to FacebookShare to Pinterest
Labels: Mexico, war on drugs

Every now and then, I feel like doing this to members of our command staff. I'd never actually do it, but this is the way I feel sometimes.