Gun Control? "Your Side Won" 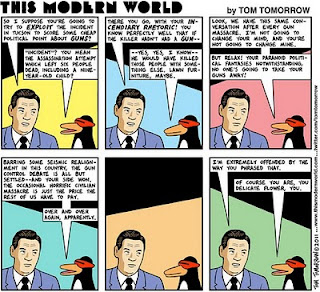 Tom Tomorrow, one of my favorite cartoonists, summarizes gun control and killings quite well. Click through to read.

"Barring some seismic realignment in this country, the gun control debate is all but settled--and your side won. The occasional horrific civilian massacre is just the price the rest of us have to pay."


As if we need it, the horrible shooting in a police station in Detroit is yet more proof that guns are not a good defense against guns. The gunman shot four before being killed by the police.

"But relax," as the penguin says, "Your paranoid political fantasies notwithstanding, no one's going to take your guns away!"

The traders miss out on dedicating due time in selecting the CFD broker and that is just because they feel that the broker has nothing to do with the trading success.
http://www.youtubev.net |