There's video of two police cars being torched in Vancouver. 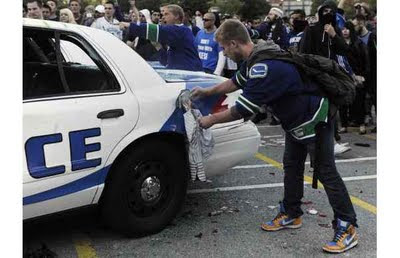 There was some pretty hard-core looting and dozens of injuries. But even their riots seem relatively polite. Apparently, nobody was shot. From the Vancouver Province:

Just after 11 p.m., in the aftermath of violence, the street was a deserted war zone. Very few businesses were left unscathed and sidewalks were littered with shattered glass.

One shoe store had virtually no merchandise left, while the London Drugs on Georgia and Granville, where alarms still blared, had its doors smashed in, and coat hangers and shoes strewn outside.

Unruly, booze-fuelled mobs also broke into Sears at Robson and Howe. One looter managed to break into Chapters bookstore, but apparently no one bothered entering.

Looters have never been known for their discerning literary tastes. 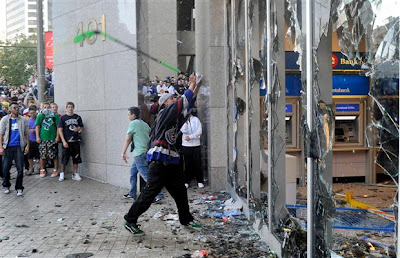 Police, of course, are damned if they do and damned if they don't. The Boston Herald reports: "While some members of the crowd expressed dismay that the police didn’t take a more aggressive approach to the early vandalism, others said officers were heavy-handed."

I must be eternally immature, because junk punch videos always make me laugh.

Classic! I'll repeat the link hereso it's easier for people to click to.

The guy lighting the police car on fire has been identified. He's a top academic student and a star water polo player. Apparently he has (had?) a scholarship to the University of Calgary:

Oh, jock culture! Why does ghetto culture get all the bum rap? Jock culture can be just as bad... and actively encouraged.

I have so little sympathy when I hear about entitled rich white jocks--and, from my experience at Princeton, hockey, lacross, and waterpolo players tend to be the worst of the worst. I just wish these idiots wouldn't get scholarships to perpetuate their stupidity.