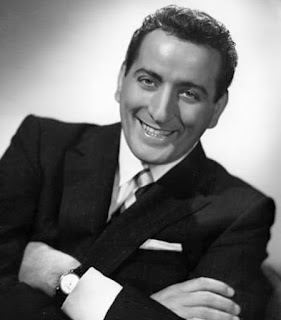 I didn't know that Tony Bennett came out for drug legalization.

Tony Bennett is a hometown hero here in Astoria, Queens. I mean, I've had more than a few debates with old timers about how great Tony Bennett is. And it's strange, because we'd both be on the same side.

Old man: "Did you know he's from Astoria?"

Me: "I agree. He sure is. Frank is overrated. Tony, underrated."

Old man: "Tony Bennett is great, I tell you."

And then they'd start getting all huffy.

Tony Bennett, by the way way, returns the love (the video is worth watching, if you like Tony Bennett, and who doesn't?):

"The finest place to live," Mr. Bennett, 82, said as he showed a reporter his favorite haunts [in Astoria]. "I’ve been all over the world — Paris and Florence and Capri — and yet I come back here and I like this better than any place I’ve ever lived."

So you may wonder why the fancy new public arts school here in Astoria in named the "Frank Sinatra School of the Arts High School. I mean, Frank Sinatra isn't from Astoria! And besides, as we all know, Tony Bennett is better than Frank.

Well, it turned out that Tony Bennett wanted it this way. The whole school was his idea, but he declined the honor of having it named after him. He asked that the school be named after his friend, Frank Sinatra. What a champ, Tony Bennett is. Did you know he's from Astoria?

In all that back and forth I almost missed this piece by my fellow members of LEAP, Niell Franklin and Katharine Celantano, about Tony Bennett.

I hear he's a great man.

Email ThisBlogThis!Share to TwitterShare to FacebookShare to Pinterest
Labels: LEAP, war on drugs