We Got Another Kingpin! (9) 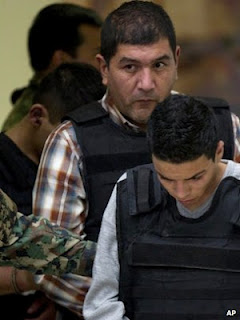 Since I'm still keeping track, I thought I'd share.

A Colombian woman known as “the queen of cocaine” was murdered earlier this month. But she was murdered, not killed or captured by the good guys. (Plus technically, she would be a Queenpin, which sounds kind of funny.) So I'm not counting her. So it's been awhile since the wheels of justice have crushed one of these evil-doer kingpins.

Luckily today I woke up today to see the amazing news that we've captured Ivan Velazquez Caballero. I mean this guy is known as El Taliban. It doesn't get much badder than that! So by my count he's the ninth "kingpin" we've put out of business in just the past two years. Of this guy, the BBC says: "He is believed to have controlled some of the most important drug routes into the United States and ruled them with cold brutality." Wowzahs! Mark those drug routes closed, shut, and done!

In Mexico 50,000 have been killed. But perhaps more than 100,000. With so many bad guys being eliminated by friend and foe, soon the streets will be safe!
No comments:

Keep on keeping on...

As you may (or may not) have noticed, this blog has been on long-term hiatus. For now, not writing blog posts is more fun than writing them. Besides, I have other things to write, some of which might actually get me paid. Speaking of which, Cop in the Hood is still selling (just topped 20,000 to date), and In Defense of Flogging will hopefully pick-up in the soon-to-be released paperback edition.

In the meantime, school has started, my wife and I are healthy and happy, and life is good. (Also, I'm thrilled to read today that my old academy instructor and friend, Agent Gene Cassidy, finally got a life-saving liver transplant!)

I suspect I'll post here again every now and then... but who knows?

In the meantime, stay safe and root for the O's!
3 comments:

Email ThisBlogThis!Share to TwitterShare to FacebookShare to Pinterest
Labels: misc
Newer Posts Older Posts Home
Subscribe to: Posts (Atom)
Peter Moskos is a professor and chair of the Department of Law, Police Science, and Criminal Justice Administration at John Jay College of Criminal Justice. He is the director of John Jay's NYPD Executive Master's Program, on the faculty of the City University of New York's Doctoral Programs in Sociology, and a Senior Fellow of the Yale Urban Ethnography Project.