A short while back I was hit with this little picture: 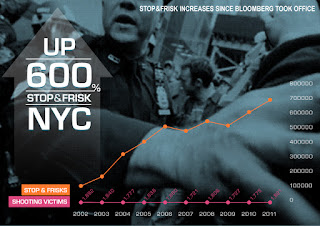 You may look at the stop-and-frisk trend. But what I found more interesting are the shooting numbers. You don't often see those numbers. Homicides are well tallied by police departments and the Uniform Crime Reports. Shootings less so. I've always used homicides as my standard indicator for crime. Homicides are reliable and valid, right?

So here's the problem: using homicides as a bellwether indicator for crime rests on the assumption that 1) there is a direct and consistent correlation between violent crime and shootings and 2) between shootings and homicides. So if homicides are down and shootings are not, it doesn't work. Something else other than police work is probably responsible for the drop in homicide. Paramedics, nurses, and doctors jump to mind. The Wall Street Journal reported on this a few months ago (but the story is behind a paywall).

The problem with the chart on shooting victims from dnainfo (which is a horrible name for a great news source) is that it draws a flat line. And 2012 was a good year for the NYPD: shootings dropped to 1,625 and homicides to 419. So if you punch the numbers into SPSS and get a trendline, you get this: 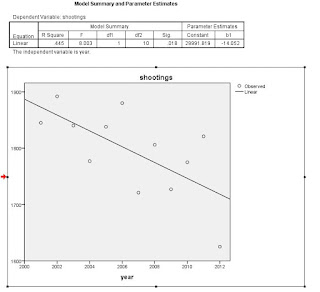 It's an average reduction of about 12 shootings per year over the past 13 years. It's not huge, but it's not insubstantial (and it is statistically significant). Shootings are down about 12 percent since 2001; homicides are down one-third (I haven't broken down the homicides by weapon, but roughly 70 percent of homicides in NYC are shootings).

One could reasonable infer that about 2/3 of the decline in homicides in NYC has nothing to do with police (because shootings are a better indicator of crime than are homicides). But still, a long-term (since 2001) 10-to-15 percent decline in New York City shootings (and, I would infer, crime) is noteworthy, if not exactly headline grabbing.

I've long argued that some some stop-and-frisks are necessary. You know, the ones based on reasonable suspicion that a suspect is armed. It's the ones that are nothing more than stat fluffers that bother me.

Email ThisBlogThis!Share to TwitterShare to FacebookShare to Pinterest
Labels: NYPD, stop and frisk

Hasn't "reasonable suspicion" become a sort of useless and arbitrary standard? What reasonable person could reasonably believe that a person has been, is, or is about to be engaged in criminal activity based on the "training and experience" of a police officer, who statistics say is only correct 12% of the time? Are "furtive movements" a reasonable indicator that someone is armed when statistically a negligible percentage of people displaying such movements are actually armed? Similarly, what reasonable person would reasonably believe that a hit from a drug dog are grounds for a search when said drug dog is statistically less accurate at detecting drugs that Punxsutawney Phil is at predicting the weather?

Maybe there should be some statistical threshold, however low, for reasonable suspicion to be valid.

But I don't want to be too harsh on reasonable suspicion. It is more than a hunch. And most people who know city life don't have such a tough time identifying (often correctly) trouble when they see it. What police officers have to do is articulate this suspicion. Checking a box for "furtive movement" does not, in my mind, meet that standard.

There's kind of an obvious answer here. Furtive movements are probably a better indicator of a person being armed than statistics would indicate. The incredibly high false positive rate probably has to do with defining "furtive movements" as "a condition marked by being young and black" or cops just flat out lying on their paperwork to make their hunches seem more reasonable.

Maybe if the courts imposed a statistical threshold it would cut back on that. Abuse your crime fighting tools to the point where they are merely serving as phony pretext and you lose them.

Maybe the increasing shooting/homicide ratio owes something to the decreasing marksmanship of criminals? If so, one would expect more random shootings by strangers for no apparent reason. This may show up in the stats as shootings of young children by non-family members.

I think that officers that work in the field for years may have that "gut" feeling, knowing something is suspicious and go for it. I think "stop and frisk" should be use only when it is necessary but when officer did it because they are taking the advantage of their authority, that would be unacceptable.