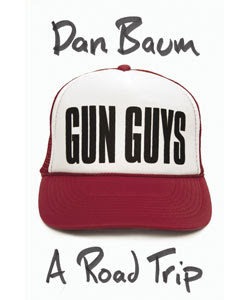 Gun Guys by Dan Baum. So far so good. Especially if you don't understand gun guys. Or if you are a gun guy but don't like the NRA.

I've written about Baum before. Truth be told, I know the guy. Truth be told, sometimes when he's in town he lets himself into my house and eats my food. But none of that would have happened if he weren't a good writer.

As a Jewish, Liberal-ish gun guy who grew up in roughly the same area as the author. This sounds like an interesting read. I will share the recommendation with my Facebook page: Gun People Who Hate Gun People.

......and now for something completely different. Yet perhaps interesting to our flog loving host.

I read the essay in the Wall Street Journal's weekend edition by Dan Baum several weeks ago. I would describe myself as not only a gun guy but also what the author John Barsness describes as a Rifle Looney.

I liked the essay and will read the book. The picture of the author in the Journal showed him with a Mauser C96, the famous "Broomhandle" pistol that Churchill carried in the Battle of Omdurman in 1898. It was the assault weapon of its day.