Stop & Frisk: They Had It Coming

A (cop) friend in Baltimore asked me with regard to stop and frisk: "What the hell is going on?" I emailed back:


You know, leaving aside the decision was entirely predicable based on the judge not exactly being a friend of police, her decision is actually kind of mild. All she f*cking asks is for cops to stop making illegal stops. It's really not too much to ask for.

The idea that cops can stop and search (because we both know how frisks can turn into searches) somebody and not even have/be able to articulate reasonable suspicion is absurd (because we both know how easy it is to articulate reasonable suspicion). They have these stupid forms in NYC (called UF-250s) and all the officer has to do is check a box -- no writing required, because the forms were made to be idiot proof, which helps turn some cops into idiots -- saying "furtive gesture" or something. It is a little absurd.

A few months ago she instructed politely, and the police department ignored her. The NYPD got what they were asking for. They refuse to rational engage/debate even with people who don't hate cops. So now they get some smart-ass judge telling them what to do. Kelly had it coming.

I think the NYPD could reduce stop and frisks by 75% without any impact on crime -- because probably 75% are quota driven and not based on valid suspicion, but instead are based on the end of the work period, not having 5 UF-250s that month, and worried that the sgt will chew you a new asshole. So you stop the first young guy in baggy jeans that walks by (who happens to be black).

What worries me is what will happen if the cops stop doing that last 25%, the stop and frisks that are actually based on reasonable suspicion. Then shootings will go up.

I still haven't gotten my head around the federal monitor, however. And I'm kind of excited about the pilot camera program. I can't imagine it will work well, but if it does it should help police tremendously, despite what police fear. Ten years ago I was against cameras (I think), but technology has moved forward. Cameras are there whether cops like or not. So it's good to have a camera with a police POV.

[Update: this is worth reading, by John Timoney. On the plus side (though he presents it as a negative) look at all the overtime cops are likely to get!]

Related, there's an excellent piece in Salon by Brian Beutler, "What I learned from getting shot." Walking down the street in D.C., Beutler was held up by two black guys in hoodies and then shot three times. He was very lucky to live:

I didn’t buy a gun, though several well-wishers seemed to think that night would’ve ended better if I’d been armed and had initiated a saloon-style shootout in the middle of the street. Other well-wishers wondered — let’s not sugarcoat it — if the experience had turned me into a racist.

Those emails were easy to respond to.

[Kal] Penn got in trouble for touting the supposed merits of New York’s stop-and-frisk policy. To the objection that the policy disproportionately targets blacks and Latinos, he responded, “And who, sadly, commits & are victims of the most crimes?”

But that’s a non sequitur. A false rationale. Take people’s fear out of the equation and the logical artifice collapses. Canadians are highly overrepresented in the field of professional ice hockey, but it would be ridiculous for anyone to walk around Alberta presumptively asking strangers on the street for autographs. When you treat everyone as a suspect, you get a lot of false positives. That’s why above and beyond the obvious injustice of it, stop and frisk isn’t wise policy. Minorities might commit most of the crime in U.S. cities, and be the likeliest victims of it, and that’s a problem with a lot of causes that should be addressed in a lot of ways. But crime is pretty rare. Not rare like being a professional hockey player is rare. But rare. Most people, white or minority, don’t do it at all.
...
Everyone who’s ever shot me was black and wearing a hoodie. There just aren’t any reasonable inferences to draw from that fact.

And file this under Right Wing Lies (VIII). There's an ad in the Greek-American paper, the National Herald, for John Catsimatidis. He's a Republican running for mayor. The ad shouts: "DON'T BLINDFOLD OUR POLICE!" And there's even a picture of a ranking officer violating rules by mis-wearing a uniform for a political ad (those are two separate violations). The ad is about The Community Safety Act, a not very significant anti-profiling bill passed by the New York City Council. Catsimatidis says, and it's presented as a quote:

The problem, and I bet you can see where I'm going with this, is that those statements are bald-faced lies. The law is about police profiling. Of course you can describe a suspect. Shame on Cats, the lying Greek.

But I can picture Greek grandmother in my neighborhood. She always suspected those Democrats loved crime and supported criminals. And now she knows it to be true because she read Yannis say it in the Herald. 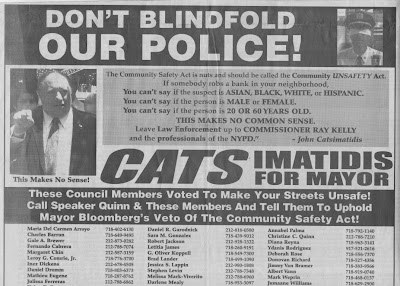 "And I'm kind of excited about the pilot camera program."

As am I. As body cams become more affordable, I think they should be issued to recruits along with guns, cuffs and Motorola's. As any properly trained (drug war era) trooper will tell you, if you don't have anything to hide, why do you care if I (John Q. Public, in this case) want to have a look?