Not too long ago I sent my Greek Americans book to John Kiriakou. He's a proud Greek American and about as close to a political prisoners as we have. In his own words:

I'm one of the people the Obama administration charged with criminal espionage, one of those whose lives were torn apart by being accused, essentially, of betraying his country. The president and the attorney general have used the Espionage Act against more people than all other administrations combined, but not against real traitors and spies. The law has been applied selectively, often against whistle-blowers and others who expose illegal, corrupt government actions.

After I blew the whistle on the CIA's waterboarding torture program in 2007, I was the subject of a years-long FBI investigation. In 2012, the Justice Department charged me with "disclosing classified information to journalists, including the name of a covert CIA officer and information revealing the role of another CIA employee in classified activities." I had revealed no more than others who were never charged, about activities — that the CIA had a program to kill or capture Al Qaeda members — that were hardly secret.

Eventually the espionage charges were dropped and I pleaded guilty to a lesser charge: confirming the name of a former CIA colleague, a name that was never made public. I am serving a 30-month sentence.

After getting my book, Kiriakou wrote me back a nice thank-you note (hand-written, of course) so I then sent him another book of mine, In Defense of Flogging. I figured he has plenty of time on his hands to think about incarceration. Kiriakou mentions me in his his latest missive from Loretto Minimum Security Federal Prison. It's a good read, if for nothing else his concise summary of prison religions and having to deal with pedophiles in prisons. The latter includes this:


Loretto’s “Education” Department scheduled a prisoner-led class last fall called “Quantum Physics.” Nobody bothered to check whether the prisoner-teacher was qualified to teach a course on quantum physics, nor did anyone request a lesson plan. As it turned out, the gay prisoner-teacher’s only degree was from the Ringling Brothers Barnum & Bailey Clown College. The course had nothing to do with quantum physics. It was a self-help pity party for pedophiles, and it sought to help them expand their rationale of denial, with the theme from “Rocky” playing in the background all the while. The teacher began the course by chanting, “We’re homos and we’re chomos! We’re homos and we’re chomos!” (“Chomo” is short for “child molester.”) One African-American prisoner, who expected to learn something about quantum physics, got up, shouted, “This is fucked up!” and walked out. Otherwise, it was a very popular class among a certain demographic. I’m not kidding.

The Dissenter has been publishing Kirikou's letters under the heading: Letter From Loretto. They are worth reading in their entirety.
Here is a brief summary of one:


[Kiriakou] has learned "how to cook methamphetamine." He has learned how best to steal food from a cafeteria to cook food "using only a live electrical wire and a garbage can full of water." He has learned how to smoke "spitarettes," which cost $10 each and are cigarettes made with chewing tobacco spit out by prison guards and dried and rolled up with toilet paper.

He concludes, "The country already is home to an increasingly large population of uneducated, untrained, unreformed, pissed-off ex-felons who are not going to just sit around hoping to win the lottery. Lacking prospects for employment, they’ll do what they do best—commit crimes."

"For the pedophiles, they will leave prison emboldened by the fact that they spent their entire sentence among like-minded sickos without once being challenged about their perversions."

This the type of prison disparaged as Club Fed. I wouldn't want to take a vacation there.

Here's a copy of one of his thoughtful thank-you letters to me. John Kiriakou will probably be getting a copy of Cop in the Hood for Easter. 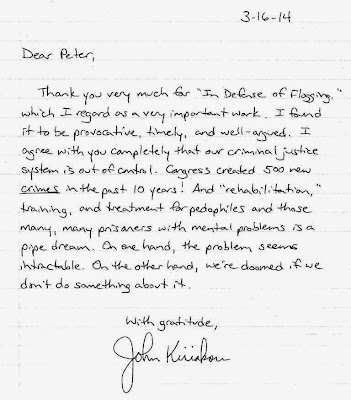 Email ThisBlogThis!Share to TwitterShare to FacebookShare to Pinterest
Labels: In Defense of Flogging, incarceration