This is the DEA's Brain on Okra

I wonder if an end-the-drug war voter is just an law-and-order conservative whose backyard okra garden was raided by local cops after being spotted from a helicopter funded by the Drug Enforcement Agency Domestic Cannabis Eradication/Suppression Program?

Barstow County, Georgia, resident Dwayne Perry may be a recent convert: "I do the right thing and they come to my house, strapped with weapons. It ain't right.... The more I thought it. What could have happened? Anything could have happened." Indeed.

Now I don't know Mr Perry's politics, but seeing how he is a white man in a conservative Georgia county (Republicans out number Democrats 8:1) I'm assuming he didn't cast his ballot for any progressive candidate wanting to end the drug war. I wonder if Mr. Perry will see a connection between the so-called "law-and-order" politicians he votes for and the police who mistook him for the enemy? [More likely, as my wife pointed out, he will just blame Obama.]

But my point does not actually concern Mr. Perry, okra aficionado. It's almost pointless to keep highlighting absurdities in the war on drugs because if you're not convinced by now, it's doubtful one more anecdote will persuade you. Even if this anecdote, you do understand, concerns a helicopter being used to spy on an innocent American which was then followed by a police raid on the backyard garden of an innocent American because the drug warriors incorrectly though okra was marijuana (a relatively benign drug that is partially legal in 23 states and the District of Columbia).

Regardless, it is worth reading Christopher Ingraham's informative Washington Post post about this raid. Did you know that close to 98 percent of all the domestically eradicated marijuana is "ditchweed"? I didn't! And "ditchweed" -- I'm not making this up -- is a technical Department of Justice term for wild non-tended marijuana that contains little if any THC. They'd be more productive pulling up kudzu!

Anyway, I clicked through to the Georgia Department of Public Safety Governor's Task Force/Drug Suppression (GTF) webpage, because that's the type of thorough bathrobe-wearing research you can expect of me. I always like to know what our hard-working taxpayer-sucking drug warriors are up to:


2012 Operational goals were exceeded with an increase over 2011 in plants eradicated, arrests, weapons seized and asset seizures.... GTF initiated and developed intelligence for grow operations throughout the state. The intelligence was then forwarded to local agencies. Subsequent investigations resulted in numerous arrests and seizures. The 2012 statistics indicate the degree of success in achieving primary operational goals. 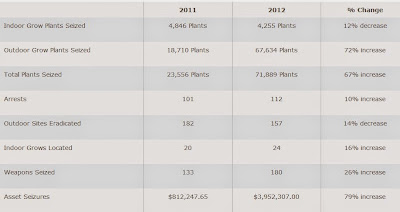 Those numbers aren't easy to read, but let me highlight a few lines:

Notice anything? The math doesn't make sense. And it's not that they're trying the old DEA trick of making shit up to make them look good. I think they're just dumb. While a couple of computations are actually correct, the grade overall, based on 2.5 correct out of 8, would still be an F.

Now look, we all make mistakes. I make typos all the time, and it's easy to punch a wrong number into a calculator. But thinking a 387 percent increase is less than 100 percent is absurd. You can pretty much mentally check "more or less than double" in your head. And a more astute practitioner of basic math skills might just know that 20 to 24 is a nice round 20% increase (and not 16%). After that even I need to break out my calculator. So I did:

Now I don't know if bad math is a direct cause and effect related to the Georgia legislature cutting $8.4 billion from public schools, but the math skills of Georgia's drug warriors are just as bad as their botany identification.

Regardless, asset forfeiture increased nearly four-fold from 2011 to 2012, presumably because the warriors have a helicopter. They can look in your backyard and, if they find drugs, take your property. These cops weren't hoping to dig up Mr. Perry's weeds. They wanted to seize his whole damn house!

(In my next post I'll tell you how to figure out percentages. For real.)

Email ThisBlogThis!Share to TwitterShare to FacebookShare to Pinterest
Labels: stats, war on drugs

Great post! If you don’t mind I’d like to give you some more homework since you’ve proved your math and teaching prowess. :-)

Although Philly has just done some sort of decrim I think, we still need some help.

First it would be fun to see the stats recalculated to show how much the Drug War is propping up clearance rates.

Next, we need a police insider like you (and LEAP) to figure out a strategy to help alleviate the pain we know the politicians, law enforcement figureheads, and so forth will potentially be blasted with.

Since us Legalizers are the “bigger men” and “bigger women” and “bigger [insert favorite other]” we still need to stick up for what’s right even if it means providing shelter for folks we’re not so keen on. In other words we need to educate and figure out a way to head that BS off at the pass.

What I’m imagining will happen is so-and-so running for office will say “under my opponent crime clearance rates went from 80% to 40%! Do we really need to have _____ in office again, increasing unsolved crime?!” (cue terror music and dark photos of grimacing opponent) When we know that clearance rates didn’t plummet due to an increase in unsolved crime, but instead we got rid of the fake crimes of drug prohibition which excessively padded the percentages of solved crimes.

So we need smart guys like you to figure out a good strategy to educate the public to prevent that garbage tactic from working.

I am not deeply knowledgeable about the world of policing, but I think sheriffs are elected. Thus I can easily imagine sheriffs being the most terrified of this. What’s needed is a concerted effort and good analogy or simple lesson on how we shouldn’t oversimplify clearance rates during prohibition to clearance rates as we repeal prohibition.

I'm not sure if you noticed this, and your posts are already up explaining the correct math, but this is how they come to these incorrect numbers. They use the same for the "Close enough" you gave them, so that one should be counted as wrong. :)

Unfortunately, there are a number of people all around that do it this way, including tv reporters.

Thanks, Kyle. I had not yet figured it out!