I can't hear you!

In 2004, the NYPD bought two "long-range acoustic devices" ($35,000 per) and said, "that they would be used only for announcements, and that their shrill deterrent function would not be employed." I didn't believe that for a second. Because, as is always the case, if you give cops toys, they will play with them. Which is why you should be worried about military hardware going to police departments.

Look, maybe sound devices are an effective use of crowd control. Maybe it's better than tear gas and batons. I don't know. But first don't you think we might want to be learn if sound cannons cause about lasting permanent damage? We simply do not know because we didn't care. They were to be used again terrorists we don't give a damn about. 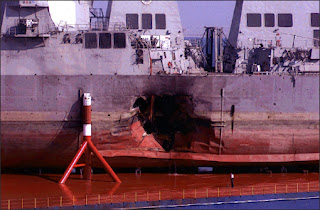 These weapons are a tool used to keep terrorist boats away from Navy ships, to prevent another attack like happened to the USS Cole.

All I can think of while watching this clip is science fiction movies that portray the US in a depressing distopian future.

So now -- without any public debate or decision-making by elected politicians -- equipment designed to defend our troops against terrorists abroad is being used by civilian police departments against the public, some of whom who are "interfering with vehicular traffic."

Taking the totality of the situation, I say "fuck 'vehicular traffic'."

They were in fear for their lives. It was a split-second decision. Second-guessing them isn't permitted.

Hey dick. You can't have it both ways. Being an aggressive apologist whose first instinct is to excuse murder AND then criticizing for the same action makes you a hypocrite, not an honest broker.

You have no idea how much I love your comments!

Which is why you should be worried about military hardware going to police departments.

Militarization fears are a bit overblown. It's all about how those tools are deployed. People freak out about armored vehicles but they are really useful in a lot of situations and help save the lives of suspects and disturbed people, not just cops. It gives the police a way to interdict and do something that's not usually an option, which is to ignore someone shooting at us. Suicidal guy with shotgun cranks a round off at that vehicle, who cares? Everyone inside knows they're not in any danger and they don't have to engage. Same with a barricaded suspect. Great use of them was made just a few days ago in San Diego when couple were used to pin in that murder suspect who had his kids in the car.

This particular example I'll grant you is sketchy. We shouldn't be deploying a tool like that without a full knowledge of the effects.

"It's all about how those tools are deployed."

You're right. That said, I'd be happy to never see deployment of flash-bang grenades.

I don't think police should ever have a vehicle with a gunned turret on top.

The rest is tactics. But the equipment does encourage military tactics. But we could have the best of both worlds.

I mean, remember that age, not too long ago, when riot police (in some cities) were taught to bang on the shields to create some bizarre Braveheart shock-and-awe effect? That was idiotic. But the problem was not shields and battons.

But first don't you think we might want to be learn if sound cannons cause about lasting permanent damage?

Has anyone really been far even as decided to use even go want to do look more like?

It's not all about how those toys are deployed. Because if they have them, they'll deploy them. You can bank on it.

If the NYPD had a nuclear bomb, they'd have used it by now.

Waco happened because some moron signed off on the BATF having a cowboy squad of wannabe Special Forces types. We have 60,000+ paramilitary raids on people in this Republic because every podunk police department has a SWAT team they can't wait to use.

I don't disagree with you in spirit, but best I know the NYPD hasn't shot any plane down yet.

I don't think so. Do you?
I don't think you (as a civilian) have the right to use force against anybody for any reason except self-defense, somewhat broadly defined. Assault is assault. Modern society want you to call 911 and never actually deal with any problem yourself.

If I *did* have the right to use force as a pedestrian, that would come in handy dealing with tourists in Times Square and when cars block the crosswalk.

It's not all about how those toys are deployed. Because if they have them, they'll deploy them. You can bank on it.

This is just nonsense. Just because I have a gun on my hip doesn't mean it gets deployed every call. The question is whether a piece of equipment has a legitimate use in a law enforcement context, and if so, what will be the training, policies, and laws that govern that use.

If you blocked my movement as I walked on the street would I have a right to use force to move you or use force againstyou? Not as a cop just a regular guy trying to get home?

Maybe. If it rose to the level of an unlawful detention then yes, you could use force because in essence that would be defending yourself against that person's unlawful force. This is actually a common domestic violence "assault". It's usually the woman calling in that her boyfriend, husband, whatever assaulted her by pushing her. But once you start getting the details you find out she was blocking the doorway trying to keep him from leaving and he pushed her aside and left.

Campbell, did bacchys really say, "If they have them, every cop who has one will deploy it on every call?" No. He said, if a police force equips every cop with a gun on his hip, someone's going to use those guns.

@ Noumenon: Well, so what? Arguing the police are militarized because they have things like rifles and an armored vehicle is just ignorant. Tactics and how equipment is deployed is where the rubber meets the road. If someone wants to make an argument that certain equipment has no valid law enforcement purpose then let's have that conversation. But that's not usually how these conversations go.