So a few months ago in Amsterdam, a couple British tourists died from a drug overdose. The Brits are kind of like the canaries in a coal mine of tourists. Brits are usually the first to somehow kill themselves, if given the opportunity. (It has to do with alcohol.)

Anyway, they did die. It turned out that some guy on the street was selling heroin as cocaine. This is odd mostly because heroin is more expensive than cocaine, so the drug dealer probably didn't know what he was selling. But the end result is people snorted heroin, many went the hospital, and a few died.

So what do you as a tourist city do? Well most places would cover it up. Or make ads showing happy people having fun in the sun. Well there isn't much sun here, but jokes aside, what they did in Amsterdam is very impressive. It's what a rational drug policy looks like.

First of all, hard drugs (heroin and cocaine) are illegal here. So you can't go into a coffee shop and buy them. But as this city is a bit of a drug tourist destination, people come here wanting to do drugs. So like anywhere, they find a way to buy them.

As I have written, police spend effort cracking down on fake drug sellers. But these real drugs. Prohibition deaths. Because both the buyer and seller thought they were buying and selling something else.

So the city but up signs to warn tourists. It may seem like common sense, but what American city would do this? And it was an issue here too. I mean, who wants to see such signs in their beautiful city? 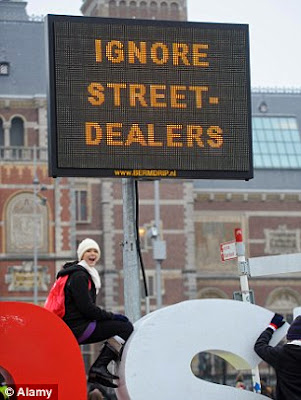 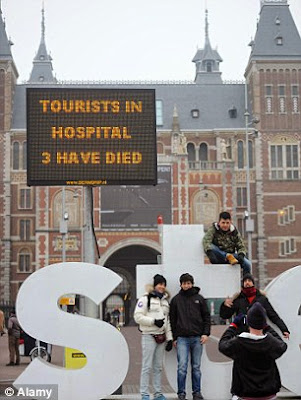 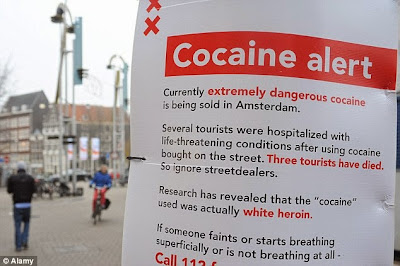 Of course the campaign to warn tourist more than the actual deaths became international news. Is this good for the city's image? Well, actually, probably, yes.

And nobody else died. That's kind of important.

Here's what the Mayor Van der Laan wrote on December 3, 2014. It's very rational. It's very Dutch:

For the past two months, seventeen predominantly young tourists fell victim to so-called 'white heroin'. Heroin, sold as cocaine on the streets, that is much more dangerous and therefore potentially deadly. Three young Brits died. An indescribable loss to their family members and friends.

People who say it is not allowed to use hard drugs are, of course, correct. Reality is, unfortunately, unruly. Many people do something illegal now and again. Even nice people, even people who could be our own family and friends. We cannot ignore that reality, and this is the foundation for our drug policy, which, at its core, takes drug usage as a health problem. Not criminalising it (as opposed to many other countries) makes room for education, safety testing and prevention. And this makes people who unexpectedly use too many or contaminated drugs, be able to apply for first aid, without worrying about being prosecuted.

We hope the police will find the perpetrator soon. In the meantime, our campaign will continue. There are 35 matrix signs with warnings to tourists. We know most young weekend tourists often arrive on Thursdays or Fridays. Special teams distribute flyers at Amstel bus station, Central Station, Schiphol Airport, and in the city centre.

In addition, we recommend the exclusion tests available at smartshops. They demonstrate whether or not you are dealing with heroin, but should not offer a false sense of security. This is why we are telling users very clearly that the test does not guarantee the drugs are safe to use.

Tourists have let us know they appreciate these efforts. Many are surprised we openly warn them of the dangers these drugs entail. I get a lot of questions about that. Don't you think it is bad for the city's reputation, all those warning signs and (inter)national media attention? people want to know. The answer to that question is 'no.' I would find it bad for the city if we did not do this. Amsterdam wants to do everything to prevent new victims. That is the least we can do.

I like this action. It's a sensible solution for this problem. Anyway, I believe the Dutch police did caught the seller of this "cocaine" a while ago.

No. They never did catch the guy who sold it. Presumably he either got out of the game or got better at it.