This comes from the The Netherlands Embassy in Washington, D.C.:


Initiative 71 became law today, legalizing marijuana in Washington, D.C. under certain circumstances. Mayor Muriel Bowser said this week that the District will not become "like Amsterdam," as though being "like Amsterdam" would be a bad thing. City Hall even refers to Amsterdam in their official Q&A. To give the people of Washington, D.C. an educated view of how D.C. compares to Amsterdam, the Netherlands Embassy in Washington offers this Q&A about Dutch marijuana laws and policies and an infographic.

Click through for the Q & A. Here's the infographic. It's odd, our American tendency, to take something that works well enough in other countries -- be it drug policy or health care -- and simple assert that it's a horrible system best avoided. 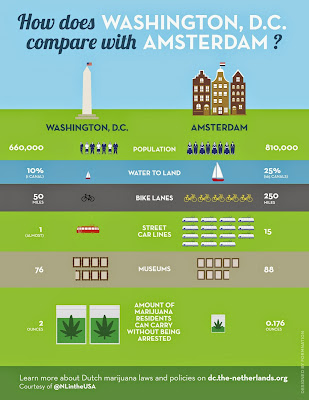