There's something that's starting to scare me about Trump and his supporters. I mean, is it really inconceivable that he will win the Republican nomination for president?

Here's a doozy of a Tweet posted by Donald Trump: 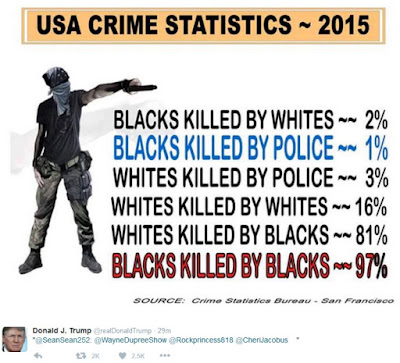 Leaving aside the racist imagery, Trump's numbers aren't even close to being true.

Here are the (approximate, but true) numbers (which, like Trump, omits hispanics):

Can people really believe that 4 in 5 murdered whites are killed by blacks? Or is just something the fearful Right wants to believe? Either way, such a belief, with no basis in truth, is somewhat between ignorant and terrifying. (Also, there is no "Crime Statistics Bureau -- San Fransisco")

When the leading Republican candidate for President has behavior entirely consistent with fascist thuggery, I think he needs to be called out. Whether it's Trump's thinking that it might be good for his white mob to rough up a minority protester, his openness to the concept of registering all Muslims in America, him calling Mexicans rapists, his lies about Arabs in Jersey City cheering the fall of the World Trade Center, or his overall tone of lies and fear mongering.

I don't know if trump is a fascist. I think he's more just an attention whore than an ideologue. But maybe he really does believe what he's saying. Certainly his followers love it. America has a long and ugly history of Nativism. And while not all Nativists are fascists, there is a bunch of overlap.


Source: (an actual real one) UCR, 2010-2013. Yearly police-involved shootings extrapolated from the Washington Post. Hispanics in the Post are reclassified as 86 percent white and 12 percent black. This is to be consistent with the UCR, which does not count Hispanic as a race.

Do these numbers actually say that one out of ten whites who are killed ate killed by police and that it's one out of twenty-five for blacks? That just seems like a very high percentage to me.

It is high. Shocking even. It would be a bit lower if hispanics were separated out at a category... but still.

The numbers do need to be double checked. But yes, as ballpark figures, it's pretty amazing.