You gotta break some eggs... to make a mess

According to Maryland Governor Hogan, C.O.R.E. stands for Creating Opportunities for Renewal and Enterprise.

"We should be able to make tremendous progress over the next for year," said the mayor.

What's the cause for celebration? Demolition.

Forgive me if I hold my applause till something is built. Now don't get me wrong, tearing these buildings down is necessary. 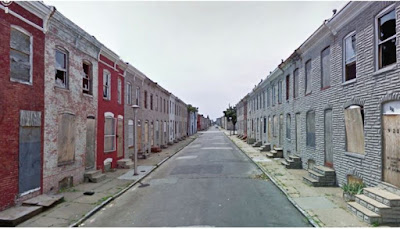 These buildings are beyond saving not just because they're abandoned but because everything of value has been stripped. There is no metal left in them. No pipes. No wires. Nothing left but rotted wood and brick walls. And even Baltimore's bricks are kind of crappy. Or they get squatted by drug addicts, and then they end up looking like this.


Earlier this year, the mayor said his goal to eliminate vacant dwellings in Sandtown-Winchester will help complete a nationally recognized renaissance in the neighborhood.
...
"We've got a tremendous commitment to Sandtown.... We need to show that we can make a difference."

Besides new housing, the area has got a prenatal outreach program and drug treatment services.

These and other community projects are supported by neighborhood residents, who, for the first time in their lives, are becoming involved in their community, the mayor said.

City Council President Mary Pat Clarke said the push to eliminate vacant houses in Sandtown-Winchester may start a larger push to diminish the tally of 6,000 vacant dwellings scattered throughout Baltimore.

Baltimore is preparing to tear down more than 800 vacant rowhouses as part of a vast, multimillion-dollar undertaking to revitalize impoverished sections of the inner city.
...
The first will be torn down in the West Baltimore community of Sandtown-Winchester....

Most of the land would be transformed into parks, yards and vegetable and flower gardens. Only a quarter of the properties would be redeveloped for housing, and a few others would become neighborhood shopping centers.

How'd that work out? Not so good.

This 1996 plan was to be "the largest rowhouse clearing in Baltimore since the early 1970s, when homes were razed along Franklin Street for an expressway that was never completed." 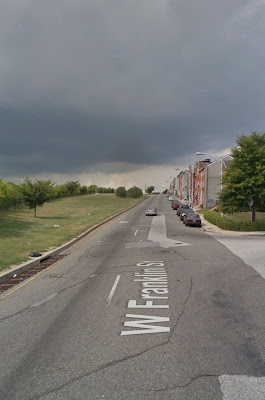 Yes, it is America's goofiest 15-block highway. Does this happen in other cities?!

Maybe one day -- not for decades, I hope -- we can name it the John Waters Memorial Highway.

the city cleared several slums and replaced them with huge public housing projects. The four high-rise complexes that were built after World War II have since deteriorated, beset by crime, drugs and poor conditions, and are being torn down.

Today, a few decades later, there are 17,000 vacant houses that used to be homes. Plus seventeen-more-thousand vacant lots.

There's a long strain in Progressive thinking that blames bricks and mortar for the problems of the people who live there. It's most exemplified by the building and then razing of high-rise public housing. But high-rise housing not inherently worse (or better) than the "slum" tenements they replaced. I hate to say it, but a slum is less defined by a bunch of buildings than the people who live live there. Not all the people, mind you. Not at all. But some of the people -- the murders, the junkies, the people who never wanted a regular job, the kids who grow up without loving parents -- they exist. And they don't make good neighbors.

The problem is, demolition is a necessary first step to improvement. Vacant buildings are bad for crime and good for nobody. But building is the hard part. And getting people to want to live there. That's hard, too. And even if it is necessary, it's still kind of sad to see these handsome Formstone buildings come down.

Maybe this time it will somehow work. It can't get better if we don't try. But forgive me for not being optimistic.

I was confused by it when driving in Baltimore without a map the other weekend. I managed to make it to Catonsville and back, but that weirdness with 40 Frankiln / Addington made me make an unwanted detour.

It's so backwards. When your city has an improving economy, people will enthusiastically buy abandoned buildings and pay to tear them down and rebuild. If your city doesn't, tearing down buildings will not magically make better ones appear. It's cargo cult thinking.

Same goes for schools. But by focusing on external circumstances of poverty, we can pretend that there isn't something wrong with the social and economic structure that creates it in the first place.