Heroin deaths have shot up since 2010: 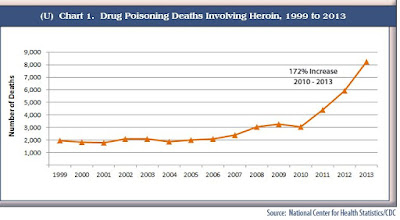 The death rate from drug overdoses is climbing at a much faster pace than other causes of death, jumping to an average of 15 per 100,000 in 2014 from nine per 100,000 in 2003.
...
Nationally, opioids were involved in more than 61 percent of deaths from overdoses in 2014. [Only 61%? I'm actually surprised it's that low.] Deaths from heroin overdoses have more than tripled since 2010 and are double the rate of deaths from cocaine. 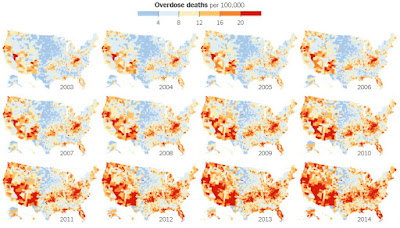 The biggest increase in deaths was from from synthetic opioids, which went up 80%. According to the CDC, the increase in synthetic opioid deaths coincided with increased reports by law enforcement of illicitly manufactured fentanyl.
...
The states with the highest rates of overdose were West Virginia, New Mexico, New Hampshire, Kentucky and Ohio.

Or maybe we should just take out another kingpin or two. That always seems to work.

2003 what a year to remember, I became US citizen and we started the invasion of Iraq.

People voluntarily do drugs and sadly it is part of human instinct. Educate our kids or better yet scare/disgust them with horrified drug stories, and super charge Obamacare, mandantory drug test for all!

They were going up back then, too. But the change seems to be in the increase in pharmaceutical abuse that happened around then.
I just found this. It seems legit:
http://www.pdmpexcellence.org/sites/all/pdfs/Jones.pdf

Should the US give out free Oxycontin? That's what's killing all those impoverished whites. The highest overdoses match up very well with the states that have the most poor whites.

New Hampshire is #39 though. Kind of an odd duck.

I don't think we should be doing anything to prevent intentional overdoses. Forcing people to live is cruel, and this is a pretty good way to go.

People might switch to pure heroin, if that were a choice.
As to not preventing overdoses, I don't quite know what to say. Other than they're not suicides.

Though if you did want to kick off, it would be a pretty good way to go...

I actually don't know much about the people who overdose (all the blogosphere seems to know about them is the statistics), but I assumed it was more "don't feel like thinking about the consequences" than bad batches or reading the label wrong or not knowing what could happen. Like they're right at the margin of indifference: surviving with one less dose, or maybe not surviving but getting that last hit, they don't have a clear pick between those.