Beware of the Risen People 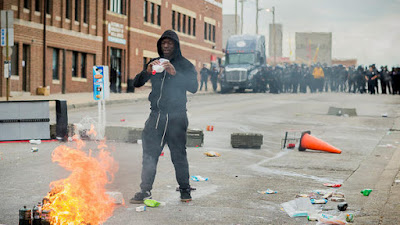 The ATF released a version of this photo taken during the April 27 riots. The guy ("repeatedly captured in photographs and other images on the day of the rioting") was later identified as Donta Betts:

He confessed to creating the explosion to ward off the cops "so people could finish ... stealing whatever they was going to steal."

The image above became a symbol.

It's pretty easy to find people defending looting, riots, militancy, and destroying police cars. "All that rage is justified." At the time (and still today) some insist they were no "riots." Just an "uprising." Beware of the risen people, oppressed, angry at (among other things) arrest-based policing that under Mayor O'Malley (who left office when Betts was 11, presumably before even his first arrest). People living in the hood in Baltimore have reason to be angry. That doesn't mean they're burning down drug stores and old-folk homes.

So it's with a bit of schadenfreude that I read Kevin Rector's story in the Sun today in which Betts pleaded guilty to a bunch of stuff:

Donta Betts participated in the looting of the CVS pharmacy at the intersection of Pennsylvania and North avenues on April 27 — which became a symbol of the unrest when it burned to the ground — and lighted a roll of toilet paper, placed in on top of propane cylinders and then squirted lighter fluid onto both in an attempt to prevent police from responding to looting at the pharmacy.

Then on July 2, Betts shot a woman after she only paid him $20 for $40 worth of heroin, according to Rosenstein's office and the plea deal. He was later captured on a recorded call by the Maryland Department of Public Safety and Correctional Services admitting to the shooting but asking an associate to get the woman to sign an affidavit saying he did not shoot her, according to Rosenstein's office.

"Donta Betts engaged in arson, looting, assault and other mayhem during the Baltimore riots. He threw rocks at the police near Mondawmin Mall; tried to destroy police cars; stole from a pharmacy, a liquor store and a shoe store; and set off a homemade bomb. Ten weeks later, he tried to murder a woman over a $20 drug dispute, then he conspired to get her to sign a false affidavit. We caught him only because police and prosecutors spent many hours reviewing video and audio recordings. It may sound like a story arc from a TV series, but it is real life in Baltimore."

You know what pains me about the picture? The line of cops "holding the line." It was the tactics of April 2015, and not the oppression of centuries, that allowed parts of Baltimore to explode. Bad leadership has consequences. The mayor and police commissioner were not up for the job. Of course there's always been oppression. Luckily riots happen less often.

Incredible story. Thanks for posting, Peter. I would have missed it.

Also do you know why they are charging Betts with a federal crime? Why is the ATF involved? How does that work?

I don't know. Good question. Arson because it's related to prescription drugs and thus interstate commerce?

But ATF has been involved since the beginning so I took it for granted.

The why is you always take a chronic asshole federal when you get the chance. The sentencing is ridiculously better and it's a real opportunity to get rid of that guy for a good long stretch.

But feds are picky and you have bring something they deem sufficiently sexy. A guy setting off a bomb on the evening news is an easy sell. Loads of the federal prosecutors are politicians at heart and love a chance to get their mug on the news.