On 26 Feb, 2016, on her very first shift and just 1 day after being sworn in, Ashley Guidon of the Prince William County (VA) Police Department was killed. R.I.P.

In honor of Ashley, police are posting their rookie photo. 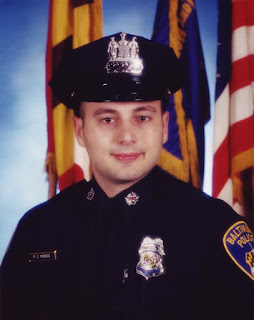 Ashley and two other officers were shot while responding to a domestic-related call. The killed murdered his wife and shot the officers as they approached his home. The suspect was arrested and uninjured.

Ashley is the 12th officer to be shot and killed this year. It is March 1st. Last year 39 officers where shot in killed. 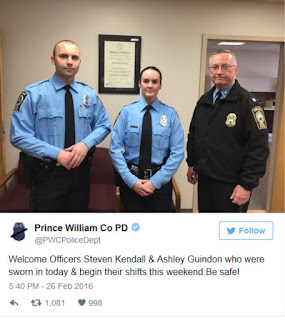 
Not too nervous about starting, strangely enough. But there are not many jobs where your mortality come to mind before starting. I assume I will live, though I didn't like the palm reading I got last night from J., A's friend, telling me I wouldn’t live too long and would die in some sort of event.

I was told at one of the first calls we were backing up, "Let me tell you something, junior, you don’t have to carry your stick to every call. You have to, well, prioritize. Big fight on the corner, bring the stick..." I still want to carry it with me all the time so it's habit. Let's see if I can resist the peer pressure. [Ed note: I did. I loved my stick stick. Still do, in fact. And I think because of that, I never had to hit anybody with it.]

In Sector Three, they all had their sticks and hats. We [Sector 2 day work] had neither.

"If you go out looking for arrests, you’ll get complaints."

"Man, I think they should just build a fucking wall around the Eastern District and let them fight it out."

Q: Did you think that coming in here or is that me in three years?

A: "I think a little differently than some. You get to murder and nobody sees anything. I think if I were shot, I'd like somebody to say something. If they don't want to be policed, fuck 'em."

I do feel a lot safer having gone through the academy as opposed to just doing ride-alongs as a researcher. These streets aren't Disneyland.

Interesting twist of racial profiling: a lot of it happens in our district, but it's only of white people. White folks looking for drugs (we assume) being told, "you got no business here. Get out of this neighborhood!"

[C.S.] is a good example of some problems. He's a bit burnt out, and knows he's not accomplishing much at all. But he doesn't think there is a solution.

Two dumb looking white guys, but more in a dumpy intellectual rather than mutant way, were arrested for coke possession, driving without a license. Both Chris and I were asked, "do you want a summons?" No, I said.

S. said his gun was drawn and he really was hoping there was somebody behind the door they were searching: "I had my finger on the trigger, and I was just praying there was somebody there with a gun!" Why does he want to shoot people? I was talking with W. about it on the way home. W. said, "No, he wasn’t joking."

Soon after I left, S. transferred to a department in New Jersey. Last I heard, and I might be wrong, but I think he stuck a fork or something in an electrical socket and hurt himself.

Email ThisBlogThis!Share to TwitterShare to FacebookShare to Pinterest
Labels: officer down, police shootings