Who is this man?

Does anybody recognize this guy from Humans of New York? More than 13,000 shares and 147,000 likes on facebook. 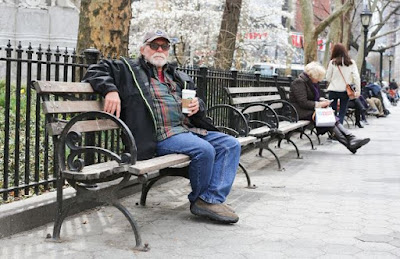 He says he was a Baltimore cop for 21 years and a heroin addict the entire time. It's not inconceivable, but it doesn't ring true. I see a guy sitting on a bench in NYC with a story. I don't believe him. I prefer my facts verified.

And I'm naturally suspicious. He says he took two-weeks' leave and quit cold turkey. But he also says he was an addict the entire time? Which one is it? And how did he pass random drug tests?

Update: It's hard to prove a negative, but I'm called BS since nobody I know recognizes this guy (and that includes people who came on the job in the since the 1960s). It just doesn't ring true. From various Baltimore cops, past and present:


If he was addicted his whole time on the force, somebody on the street would have outed him to get a better deal from another officer. He'd have been too high to be as afraid as he claims. Who walks in on their junkie side partner and just says "well, as long as it doesn't affect your work"? How many junkies would YOU trust YOUR life to? So he gets clean and doesn't force his WIFE into rehab? She's using every day and spending his money?????
Nah. Good reading,though. I'll wait for the movie.

Let's say this fool retired 20 or even 25 years ago, it still would have been during the time when mandatory "random" urinalysis was conducted. From what I understand, when the program was started, within the first two years, everyone had been tested at least once.

That long ago, to use heroin in a powder form it would have had to have been "smoked" as the purity of the powder back then, I do not believe was high enough to snort. And there is no way he was doing it while working and getting away with it because he would have immediately went "on the nod" and not been able to work until he came off of his high.

Locking himself in a hotel room, alone, for two weeks while he kicked it is another pile of manure. He would have needed at least one other person there to even try to pull it off to help him keep hydrated, etc. And the hotel staff after a few days of the do not disturb sign on the door know would have checked in some form to see if he was in there and did not skip out on the bill.

The only thing this story is good for is fertilizer.

The heroin purity argument is persuasive. Heroin, best I know, needs to approach 40 percent purity to make it snortable. It was nothing close to that in the 1980s. From the DEA: 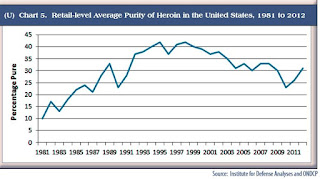 The only real chance nobody would recognize this guy is if were already retired in the 1990s.

I know that there were some steroid users in the mid 80s, a couple of cocaine resignations, and a couple of positive test results where the addicted claimed addiction as a medical disability.

And of course, why this matters:

We have enough issues, now everyone will think half of us get high.

Impersonating a former cop. But why did he have to pick Baltimore?

2nd Update: I've heard back from more old-time former Baltimore Cops. Nobody has ever seen this guy before.

The tone to me sounds way off, like a screenplay from someone who hasn't done the job. "I don’t think people understand the fear involved in the job. We were scared all the time." That's not how it is at all and I can't imagine an actual city beat cop ever describing it that way. What really happens is that by necessity the horrific becomes blase and you find yourself literally discussing dinner plans with a dead body in the room.

I know. *Moments* of fear. Sure. But I can't imagine any cop feeling "scared all the time" (boredom would rank a lot higher). Anybody who felt fear that much would quit. And yeah, dinner plans (or perhaps eating lunch) with a dead body seem more par for the course.

Hey Pete,
I am calling BS on this story as well. In my 11 years on the force, I had approximately 6 "random" drug tests. I don't even see how he could have possibly never had one nor passed one if he were high. I don't recognize him.
Gotti Rules