Wouldn't it be great if I could show that video games decrease violence because young men, rather than hanging out and starting fights and shootings on the corner, stay inside and play "Call of Duty"?

I don't think people over 40 understand just how big video games are. Compare games to movies. "Star Wars: The Force Awakens" has grossed $935,500,000 to date. Grand Theft Auto V grossed more than that in three days.

Overall I still suspect that video games had something to do with the crime drop in the late 1990s. That was when video games got good enough that even cool kids stayed inside to play them. And if you're home, you're not on the street getting into trouble. More recently video game sales have leveled off. And social media has grown, which may contribute to a rise in crime. Who knows? And how would you prove it?

As preliminary research I thought I'd look some big games and try and link their release to a drop in nationwide homicide.

But -- and not for the first time -- I was stymied by the UCR. They don't break crimes down by days. Only months. And that's not good enough. Damn them!

But at least for starters I could go to Opendata Baltimore to see if anything was going on in Baltimore. I looked at all assaults and also homicides in the 7 days both before and after release day (excluding the day of release because of hassles with the early morning hours). 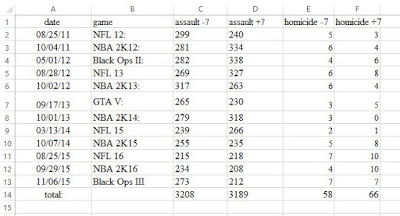 It looks like nothing is up. The data look random. Anyway, overall there's certainly no decrease. Homicides are up, but the n is low and it's probably just random fluctuation (and assaults are down).

Email ThisBlogThis!Share to TwitterShare to FacebookShare to Pinterest
Labels: stats

I just reviewed a paper about this topic for a criminology journal (probably more than I should say), but will forward if it gets published.