Why fewer police-involved shootings in Chicago might be bad

Police-involved shootings in Chicago are way down.

This is great news for advocates of police reform.

Chicago in 2016 will probably see police shoot just 15 or so people (based quite sketchily on January through March figures). This compares to 45 people shot in 2014. The decrease is without doubt due in part to those who keep a laser-like focus on police misconduct. The number of those shot by Chicago Police has plummeted for two consecutive years.

What if -- hypothetically of course and absent any corresponding decrease in violence in general -- what if police-involved shootings served as a proxy (an indirect indicator) for police officers' engagement and interaction with violent criminals and the criminal class? It's not inconceivable. Another indicator is that police stops in Chicago have also plummeted.

In the police world we'd call these facts "clues." Of course in the academic world I'm "just guessing." But I'll have a lot of time to guess before "hard social science" (that's a joke, by the way) can prove what's going on.

But hey, why focus on the negative? Why focus on criminals and dead young black and hispanic men when we can just keep the heat on police? Let's assume heroic police behavior is criminal. Let's criminally prosecute innocent cops and drive other cops who defend themselves into hiding. Let's build a social movement on (what turns out to be) a lie and then pretend it doesn't matter because, well, it could have been true. And then, when police do less and crime goes up, deny it. And then, when you can't deny it any longer, say we don't know why crime is up. Or better yet, blame the police.

But police-involved shootings are way down! 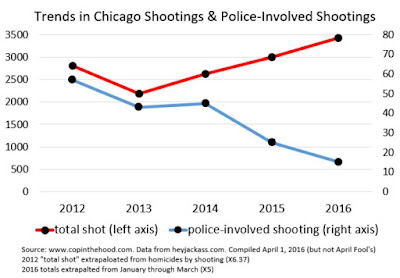 Update: here's the same data but compiled on June 6: 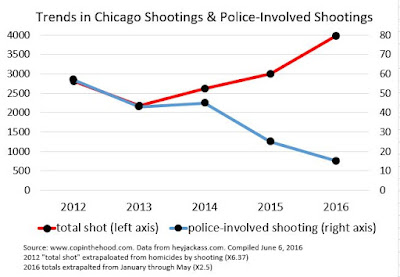 Opposite of love is not hatred, but indifference.

Chicago PD is a good show though, is it a coincidence that the show started in 2014 and police-involved shooting went sharply down?

On the other hand for being skeptical, maybe shootings somehow are more likely to be reported by some high tech things like: this in nyc...

The jury is still out on shot spotter.

And "shootings," by definition, mean that somebody was shot. It's not just gunfire (AKA "discharge"). If the bullet doesn't actually enter human flesh, it's not a shooting.

You wrote "miscounted" in the first paragraph when you probably meant "misconduct."

The graph makes it look as though something happened in 2013 to reverse a trend in shootings. Is that true? Or was 2012 an anomaly? Data from a few years before 2012 would be helpful. In any case, that upward trend begins when police shootings are also increasing after a decrease, though the increase is smaller (looks like about a 5% increase vs. a 25% increase).

Were the subsequent increases affected by the decrease in police shootings? Or were they just a continuation of a trend that started when police shootings had reversed their downward trend?

My uninformed guess would be that the increase in shootings has a lot to do with gangs and gang conflict. So then the question is how much police shootings and police activity generally reduce gang conflicts.

Shooting data, as you know, is hard to get. Just from the one source, that was as far back as I could easily get, and even the 2012 data is extrapolated from shooting.

And of course shootings are tied to gangs. That's like a cop-out. Gangs didn't suddenly appear in 2014. Then why are gang shootings up?

But I'm always suspicious when "gangs" are blamed (more so on the east coast, mind you) since it's usually just an attempt to deflect the issue. At the least it begs the question.