"Do Not Shoot Anyone": Policing J'Ouvert and the West Indian Day Parade

Yes, the NYPD and others politely asked people to not shoot each other at J'Ouvert this year. The New York Post quotes a police source as saying, "I guess this is the de Blasio crime prevention program."

In Brooklyn, pre-lent pre-dawn J'Ouvert is followed by the massive (like one-million people massive) Caribbean Day Parade (which has also had a few unfortunate deaths over the years). The two events are organized separately and not related but by culture and heritage. 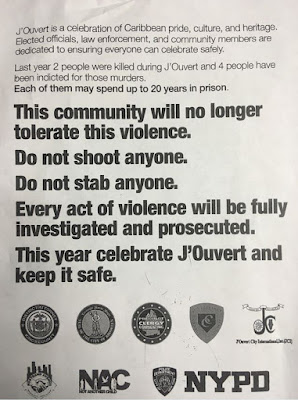 It's easy to mock a poster, but I don't know if it was a bad idea. It's never a bad idea to work collaboratively and ask politely. It's not like the poster was the only thing police were doing. If nothing else, at least you can say, "At least we tried."

Last year an aide to Gov. Cuomo was shot and killed in the pre-dawn J'Ouvert hours.


While only one bullet struck Gabay, some 20 or so people using some 27 firearms, mostly pistols, blasted off as many as three dozen rounds during the exchange.

When the smoke cleared, three others were shot and two people were stabbed, one fatally.


Last year organizers claimed the shootings happened during the parade, but not because of the parade. Just, you know, typical Brooklyn violence. Former cop and City Council Member Eric Adams said the reaction to the violence was "hysteria": "We don’t stop celebrating the Fourth of July because some crazy breaks out a gun.” No, we don't. But people don't break out guns in most festivals.

In 2014, "a gunman opened fire into a crowd of revelers, killing one man and wounding two others. In 2012, two people were stabbed to death and at least two were shot."

From the New York Times:

Along with colorful costumes and dancing in the streets, there has been another constant: violence. Over the past decade, 21 shootings and other violent acts have been recorded at J’ouvert festivities, said Assistant Chief Steven Powers, the department’s Brooklyn South commander.

At a news conference on Monday morning, Mayor Bill de Blasio said that the additional security measures “were exactly the right things to do,” but added, “We didn’t get the results we wanted.”

Asked whether the parade should be moved or canceled, the mayor said only that “every option will be on the table.”

He compared the J’ouvert festivities with other large New York City celebrations like the St. Patrick’s Day Parade and the Puerto Rican Day Parade, both of which were once far more raucous.

“All of those previously violent events were brought under control,” Mr. de Blasio, a Democrat, said. “We will find a way to keep this one under control.”

So yeah, you need to police J'Ouvert and the West Indian Day Parade differently than a million people listening to classical music in Central Park. And no, it's not because the attendees at the former are mostly black and the latter mostly white.

This year, rather than a scatter-shot police approach, for city decided to work with the organizers of J'Ouvert (the Caribbean Day Parade has always been much more legit). The city granted its first ever permit to J'Ouvert. There was a route, street closures, light towers, and an even greater police presence. The whole nine yards.

Alas, it didn't work. Two people were killed and last I heard at least three others were shot. A 17-year-old and 22-year-old were fatally shot a block from each other, at 4 and 4:30 AM, along the route of the official J'Ouvert parade.

One of those shot, 73-year-old Margaraet Peters, said,


The youths seem to want to ruin the West Indian parade. They’re smoking marijuana, carrying on, looking for fights with other groups.... The bystanders are always the ones getting hurt. It’s so sad – I could have died. I told my family the most important thing is I’m alive.

For cops, this day is a no-win no-fun too-loud not-worth-the-mandatory-overtime hassle. I suspect Caribbean cops, and there are many in the NYPD, may beg to differ. But the few I know don't want anything to do with policing this event either.

Cops hate working these events because, like you, they want to be eating burgers with their families on Labor Day. Instead, they have to work a chaotic scene of literally a million people. And the 999,000 who aren't causing trouble aren't cops' concern. Because at some point, especially pre-dawn, you know there will be fights and gunfire. And God forbid you actually stop somebody, cause then the New York Times will say you're racist.

For the often anti-cop Daily News, the story isn't just violence but the cops complaining. Cops "crowing" over killings on "racist online message board," screams the headline. Juicy! For example, right there in the first post, say the News:

It's 0644 on Mon. morning and already we have 4 SHOT with 2 DEAD (SHOT IN FACE) and we have 1 reported STABBING. Godless DeBlowsio was on his hands and knees PRAYING FOR THE STORM TO WASH OUT THE PARADE.

Uh, actually, yeah. I bet de Blasio would have happily had the skies open up at 02:00 hours last night.

[For the record Thee Rant often brings out the worst cops and the worst in cops. And yeah, some cops and retired cops are racist and know how to use the caps-lock key. But bitching about violence and the political sensitivities around working J'Ouvert makes you human, not racist.]

But at least we tried. I guess you try again next year. It's not like I've got the answer. I don't think you could shut it down, even if you wanted to. And why would you want to? You really shouldn't stop Carnival.
I try and avoid massive crowds and police barriers, but my intrepid wife sent this report from the front line:

Pretty freakin' awesome, and made me sorry I've never gone before. Not terribly crowded. Insanely good fashion everywhere. Great-looking food. Only intermittently loud, as sound systems are pretty spread out in the parade. I did not find the girl I was trying to meet, but, oh well.

Maybe next year I will go. I do look great in feathers. 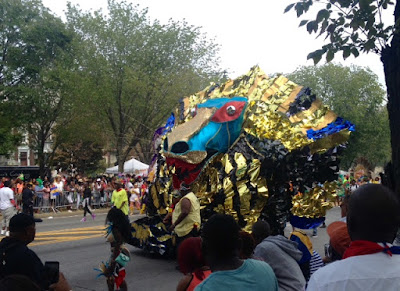 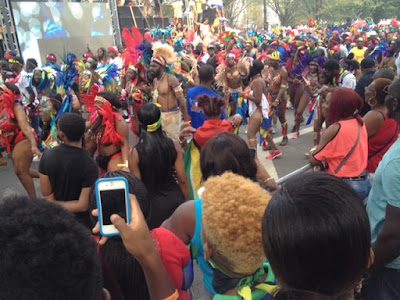 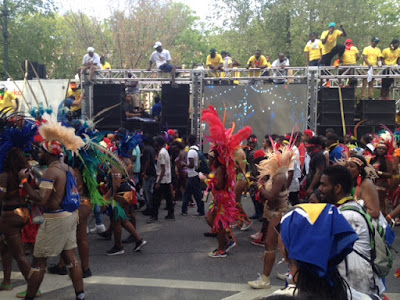 St. Patrick's Day used to be bad too. Lots of kids (white, of course) drunk by mid-morning -- puking in the subways, fighting, occasionally attacking random people. It was unpleasant though not deadly. It's not that way any more, probably thanks to changes in law enforcement though I really don't know the history of this.