If only we cared about homicide victims as much as we did about traffic fatalities, we might see an article in the paper about the biggest homicide spike in 50 years. Instead, there is a Times article about distracted driving: "Biggest Spike in Traffic Deaths in 50 Years? Blame Apps."

The rise in traffic deaths -- the total number of highway deaths in America (35,000) is roughly twice the number homicide victims (16,000) -- has been reported by the Wall Street Journal, NBC, Newsweek, and Reuters. None of these stories talk about a "statistical blip," or "traffic deaths are still at historic lows," or "no need to worry, because certain high-speed roads account for most deaths." No. Nor should they. Because the rise in deaths is real and real people are dying. When it comes to traffic deaths, we take the data and try and figure what is happening and how to prevent it. Why aren't we doing that with homicide?

Violence begets violence. And the longer we stick our head in the sand, the worse this will be. I know the phrase "law and order" is right-wing, but the concept that people have a basic right to live is not. The left shouldn't cede law-and-order issues to the right. Ideological prisms need to be set aside for basic human decency. It's better to address the violence problem before thousands more are killed.

I understand, or at least I think I do, the motivations of those on the left who minimize the significance of the homicide increase. There's a very real concern that those on the right will use crime to push ineffective and even racist policies that hurt the very people most at risk. Or maybe it's difficult for some to objectively examine the homicide increase in light of everything that has happened, post-Ferguson, with demands that police be less racially disparate and proactive.

Murder victims are disproportionately poor young black male high-school drop-outs. This is politically awkward at best, certainly when it comes to the matter of black lives. But some on the left have gone so far to say that since "most Americans" aren't at greater risk of being killed, "warnings" are politically "provocative." Good God! I mean I know that you , dear reader, are much more likely to be killed in a car crash than be the victim of a homicide. But for many other people, the opposite is true. Because it affects others more than you is reason to care even more.

So I read this Times article about traffic deaths and notice how much it, word for word, could be applied to the nation's spike in murder, the one nobody is talking about. Even the graphic could basically be copied (though I made one for murder). I did change a few things in [brackets] -- eg: "transportation" to "justice" and "highway fatalities" to "homicides" -- to create the article I wish were getting as much press:

After steady declines over the last four decades, [homicides] last year recorded the largest annual percentage increase in 50 years. And the numbers so far this year are even worse. In the first six months of 2016, [homicide] deaths jumped [13.1] percent, from the comparable period of 2015, according to the [Brennan Center].

"This is a crisis that needs to be addressed now,” the head of the agency, said in an interview.

Alarmed by the statistics, the Department of [Justice] in October outlined a plan to work with the [police] and advocacy groups to devise a “Road to Zero” strategy, with the ambitious goal of eliminating [murder] within 30 years.

The Obama administration’s [Attorney General, Loretta Lynch,] said that the near-term effort would involve identifying changes in regulations, laws and standards that could help reduce fatalities.

“This is a serious public safety concern for the nation,” [she] said at a recent conference in Washington held by the National [Violence Prevention] Board. “We are all trying to figure out to what extent this is the new normal.”


Deadly [Murder] Rise
After decades of steady declines, the number of deaths stemming from [homicide] has risen in the last two years to its highest level since 2009. 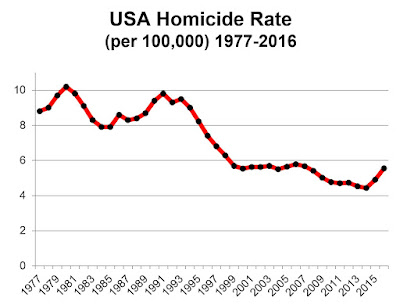 Wow, that graph really shows how bad the good old days were.