Murder in 2017 continues to go up. (The increase is at slower pace compared to the previous two years, but that is minor consolation.) At what point do you sound the alarm? Yes, the murder rate is still lower than when it was high, but the increase since 2014 is equal (or may surpass) the largest homicide increase in America ever (1966-1968). Here's a very good summary of the murder rise by Jeff Asher at 538.com. It's both fact based and spin free. Refreshing.

Asher brings the data up to mid-year 2017. Overall, nationwide, on average, it's not good. There's an estimated 27 percent homicide increase since 2014. And no, it's not just isolated to a few cities. My previous post gives data for cities 2014-2016. 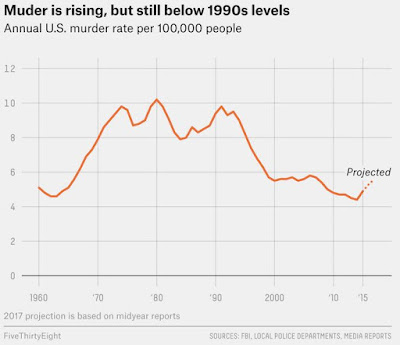 FiveThirtyEight (here ) has some homicide data for the first half of this year.
(Sorry about the messed-up formatting.)

Yes, and I'm happy Jeff is keeping track. Somebody has to. But I really don't like looking at half-year year-to-year data at the city level. The n's are just so small. I mean, I did look at the numbers to see if anything jumps out, but that's as far as I want to go. If we're looking for trends, makes more sense to go back further in time.