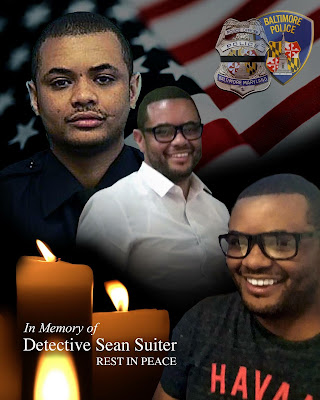 Baltimore City Detective Sean Suiter was shot and killed two days ago while doing his job.

I didn't know Sean, but he also came up in 1999. He had 18 years on. Were I still a Baltimore Police Officer, that could be me. His killer has not been arrested.

After his shooting I glued online to KGA, Baltimore police radio dispatch. The sadness in the voices of the dispatchers and officers was palpable. But the show goes on. The calls kept coming. There is no time-out in policing. And the routine bullshit calls keep coming. Kids were fighting in the downtown Starbucks. A man named Precious Romeo wanted his a woman removed from his house (I'm not making that up). An officer in the Eastern was at the front door of a caller but his bodycam wouldn't activate. He was told to 10-18 (return to the district) to fill out related paperwork (thanks, federal consent decree). I wonder what the caller thought about that. And there were two other unrelated shooting victims within a few hours. One victim walked himself into Shock Trauma, adding to the chaotic scene there. There weren't enough crime labs available for all the crime scenes. Another man was shot in the Eastern District. The Central and Western Districts were all but shut down by police activity. Officers and dispatchers were snapping at other (which is rare).

After a few hours of crazy chaos, things returned to the usual choas. Detective Suiter would live another day, but we knew it was futile, with the gunshot wound to his brain.

Rest in peace, Detective Suiter. My heart goes to his wife, his five children, and all who loved him. Rest in peace.

Email ThisBlogThis!Share to TwitterShare to FacebookShare to Pinterest
Labels: Baltimore, officer down

I get tired of that feeling in the pit of my stomach every time I break out the mourning band for my badge. RIP Detective Suiter.